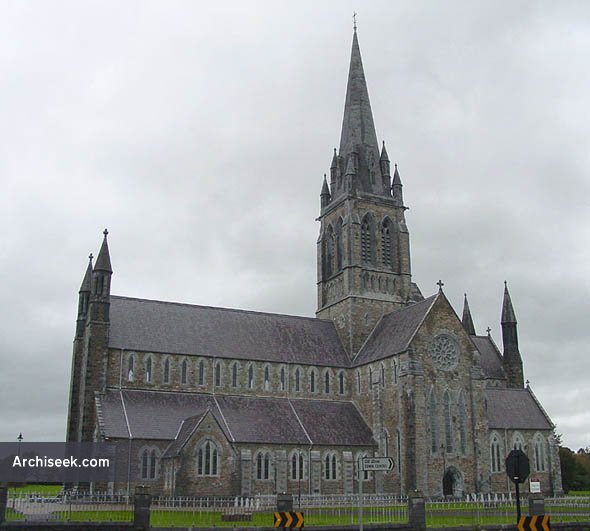 In 1840 a local fundraising committee commissioned Augustus Welby Pugin to design a new cathedral, despite having only raised 800 pounds. His design drew some inspiration from the ancient ruined cathedral at Ardfert, most notably in the slender triple lancets in the east wall, which are repeated in the west wall and in each transept. Killarney was Pugin’s personal homage to his favourite cathedral, Salisbury Cathedral.

The foundation stone was laid in the summer of 1842. Funds were still short, and public appeals were made in Ireland and the US. Work continued under the supervision of Richard Pierce of Wexford (Pugin being unable to undertake personal supervision) until May 1848. No work was done for five years due to the Great Famine and construction was resumed at the beginning of 1853, and J.J McCarthy succeeded Pugin as architect. Two years later, the total cost having risen to £20,000, the cathedral was free of debt, substantially complete, and ready for divine worship. 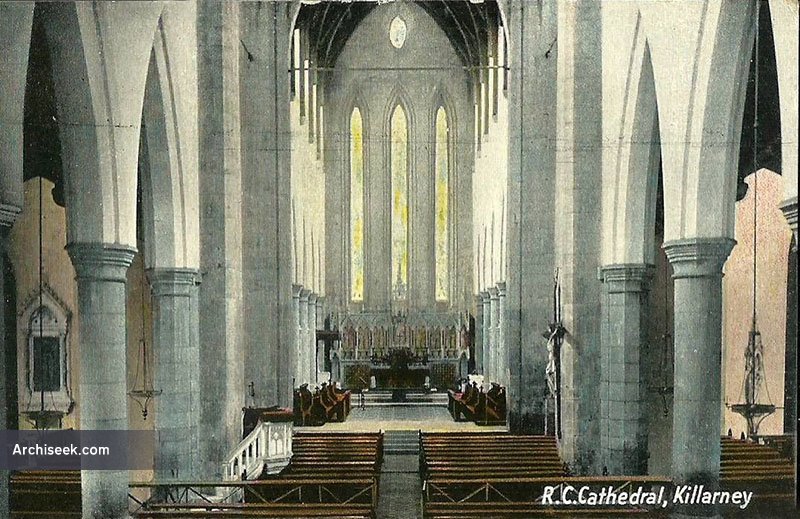 Although the cathedral was now usable for worship, it was still unfinished. Pugin’s design for a great central tower was left for future generations to build. An organ was installed in 1869 and minor additions were made, but the final effort began in 1907. The firm of George Ashlin and Thomas Coleman, who had designed Cobh Cathedral, were appointed to complete the work of Pugin and McCarthy. The nave and aisles were extended westwards by 8.2m to create two new bays; a new sacristy and mortuary were built; pinnacles were added to the flanking turrets at the west end, and a pinnacle at the east end to join one already there; the crossing piers were strengthened, and a great tower and spire, 86.8m high, were constructed above at a cost of £36,500. The work was completed and the cathedral finished in 1912.

The gallery at the west end of the nave contains an organ by Telford & Son, erected in 1869. In the early 1970’s it was rebuilt and divided, to reveal the lower part of the west window. 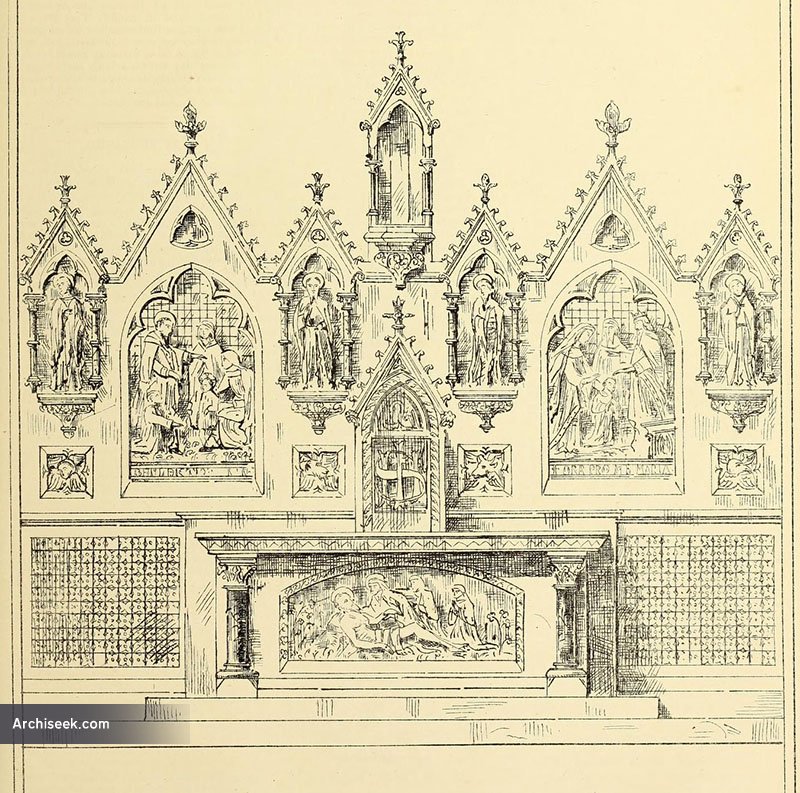 The interior of the cathedral was gutted in the 1970s inline with recent thinking. The work lasted from April 1972 until July 1973 and the total cost was £278,500. The designer was Ray Carroll of Glencullen, Co. Dublin, and the supervising architect was Daniel J. Kennedy of Tralee. Carroll adopted a very radical and much-criticised approach to the re-ordering of the Cathedral, and apart from a few small areas, nothing of the former interior remains to be seen. The greatest single change was the removal of all the internal Victorian plasterwork. The original reredos, altar and screens were removed, the floor of the crossing was raised to the level of the former sanctuary, and a new sanctuary was created at the crossing. A new altar, pulpit, throne and chairs, all made of Tasmanian oak, were installed. A new font consisting of a limestone bowl was fitted into the angle between the south-west pier of the crossing and the first pier of the south nave arcade. In the north transept the former St. Patrick’s Altar was removed.