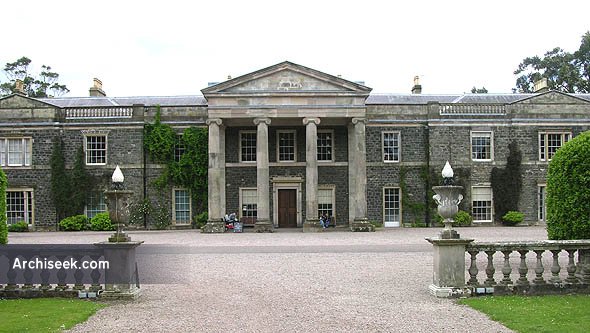 Between 1804 and 1806, the London architect George Dance was employed by Alexander Stewart, later first Marquess of Londonderry, to design what is now the west wing of the mansion. Nearly two decades earlier Wyatt had been brought in to remodel his father’s house, but Wyatt’s designs were never to be realised due to cost constraints.

In 1835, the Third Marquess engaged the celebrated Irish architect William Vitruvius Morrison to rebuild and enlarge Mount Stewart. This work was finished around 1840, two years after Morrison’s death. Morrison’s work comprised a large new block to the rear of the old house with an eleven-bay entrance front and pedimented porte cochère.

The new work was designed so that it matched Dance’s earlier building and a balustraded roof parapet was added to the entirety to give the design a sense of unity. The main door of the entrance hall Ieads into the principal interior feature of Morrison’s house – a great central hall with an octagonal balustraded gallery lit from above through a dome filled with stained glass.