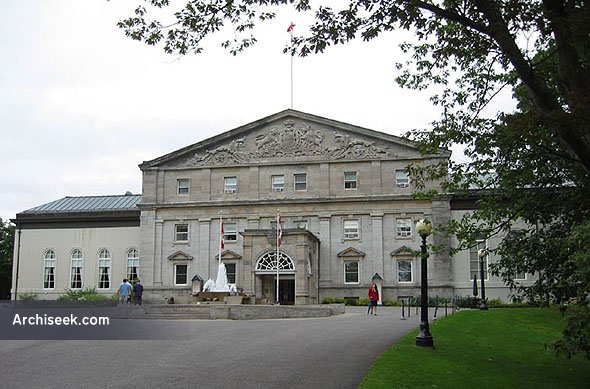 The residence was built in 1838 to house Scottish stone mason Thomas McKay and his family, who occupied the residence until 1855. Queen Victoria chose Ottawa in 1858 as the new capital of the Province of Canada, and in 1864 Rideau Hall became the residence of the governor general of British North America, Lord Monck. In 1867 he became the first governor general of the Dominion of Canada, and Rideau Hall has continued as the residence of his successors. The house has since been expanded numerous times since its initial construction.

The main entrance, completed in 1913, contains all the heraldic shields of the governors of Canada, beginning with Samuel de Champlain, the first governor of New France. Today, the residence is used to officially receive foreign heads of state and both incoming and outgoing ambassadors to Canada. It is also the site of presentation for many Canadian awards and where the official ceremonies swearing in a newly chosen prime minister and ministers take place, as well as the place where the writ of an election is dropped.