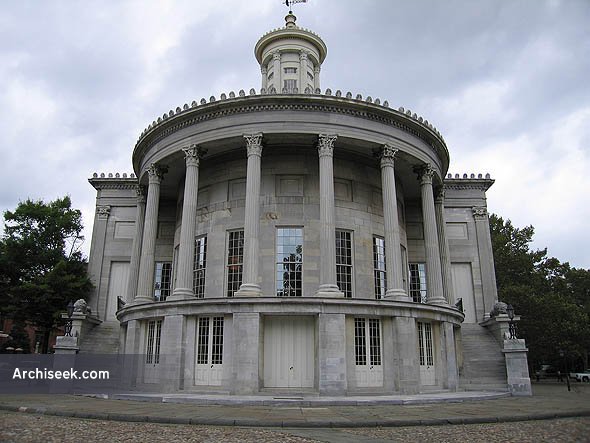 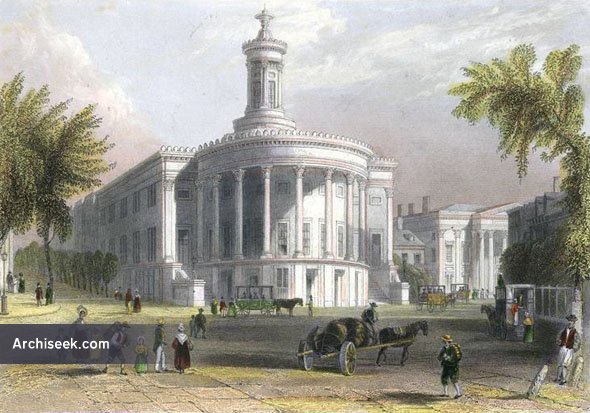 Designed by rising architect William Strickland. He was the architect of the steeple on Independence Hall, the U.S. Naval Asylum, and the U.S. Mint. From 1828 to 1833, Strickland designed such a large number of public buildings within Philadelphia that he was dubbed the “city architect”. Due to the size and number of his commissions, Strickland played a major role in the transformation of Philadelphia.

“A masterpiece of elaborate Greek Revival architecture, this curious marble structure presents not only the characteristic Doric portico of the time, in the west front, but also an unusual curving facade in the Corinthian order at the east end, which recalls Sir John Soane’s circular temple motif at the Bank of England in London. With this Strickland has brilliantly combined a tower in the form of the Choragic Monument of Lysicrates.” “” Theo B. White, ed. Philadelphia Architecture in the Nineteenth Century. Philadelphia: The Art Alliance Press, 1973. p26.

“The Philadelphia Merchants’ Exchange”¦is a brilliantly handled solution to a difficult corner site and one of the masterpieces of the period. In the early days of the new republic, Boston remained under the architectural influence of English Georgian, while Philadelphia, at that time the metropolis, became one of the main centres of the Greek Revival, launched in 1798 by Benjamin H. Latrobe, Strickland’s mentor, with the building of the Bank of Philadelphia.” “” John Julius Norwich, ed. Great Architecture of The World. p211.