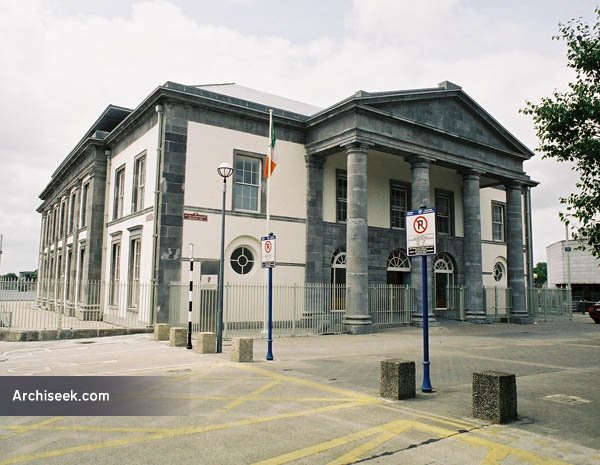 Recently renovated with much work carried out on the interior and the exterior restored. While the building envelope retained much of its original form from this period, the interior however was extensively remodelled in 1957 and any surviving historic detail at this time was lost. The building was redeveloped by Murray O’Laoire Architects. It is a handsome building in the classical style as most Irish courthouses tend to be. Somehow, the building is less imposing than many, perhaps because it is not elevated over a basement and is sited on a flat site. The exterior is characterised by its finish of dark stone and rendered areas giving it a distinctive appearance.

Described in Lewis as: “The county court-house, on Merchants’-quay, an elegant structure, completed in 1810, at an expense of £12,000, is a quadrangular building of hewn stone, with a portico, supported by four lofty pillars, and surrounded by a light iron balustrade: it contains civil and criminal courts, jury-rooms, and other offices.”