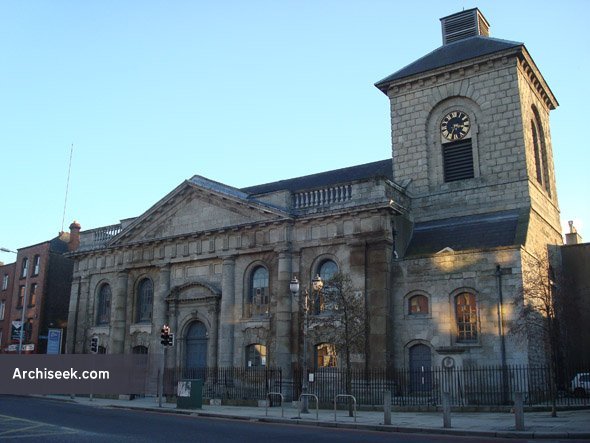 Originally built in 1185, the church was rebuilt in its present form in the 18th century by John Smyth (or Smith). Maurice Craig maintained that St. Catherine’s has “the finest façade of any church in Dublin”. A planned spire was never completed. Internally, St. Catherine’s is a galleried church,a type common in Dublin at this time.

Described in 1837, “The church, which had been a chapel to St. Thomas the Martyr, was rebuilt in its present form in 1769: it is situated oh the south side of Thomas-street, and is built of mountain granite, in the Doric style: four semi-columns, with their entablature, enriched by triglyphs, support a noble pediment in the centre, and on each side the entablature is continued the entire length, and supported at each extremity by coupled pilasters: above the entablature, at each side of the pediment, is a stone balustrade. Between the centre columns is a handsome Ionic arched door, and the other intermediate spaces are occupied by a double range of windows. The interior is elegantly simple: eight Ionic columns support the galleries, above which the same number of Corinthian pilasters rise to the roof. At the west end of the building is an unfinished belfry.”

Architects Curdy and Mitchell restored the church in 1877 and during the following decade an interior reordering was undertaken by architect James F. Fuller, during which the old box pews were replaced with open ones.

The church closed in 1966 due to a decrease in the local population. After a period of decline, and later of refurbishment, St. Catherine’s was re-consecrated and has been the place of worship for the Anglican “CORE” church.