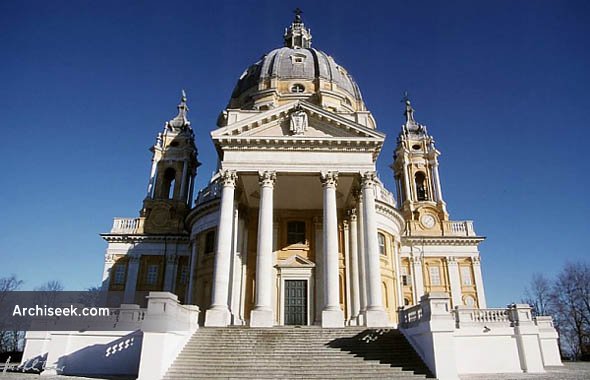 On September 2 1706, Princes Vittorio Amedeo II and Eugenio of Savoy climbed the high hill to observe the position of the Franco-Spanish army that had been besieging the town for four months and made a vow to dedicate the site to the Holy Mother of Graces for the liberation of Turin. The vow, which consisted in the commitment to have a grand church built on that same hill in the case of victory over the French, was made before the wooden statue of the Holy Mother, now kept in the Chapel that exactly reproduces the one demolished to make room for the Basilica.

Construction entailed the lowering of the hill by some 40 metres to create a wide flat area for building the church at some 670 metres altitude. Building started on July 20 1717 to a design by the architect Filippo Juvarra. The church, though still not completely finished, was dedicated by Carlo Emanuele III on November 5 1731. Its plan is circular and protrudes anteriorly with an imposing pronaos supported by eight Corinthian columns, accessed by a solemn stairway. The tall dome dominates the surrounding landscape between the two 60 metre tall bell towers inspired by Borromini.