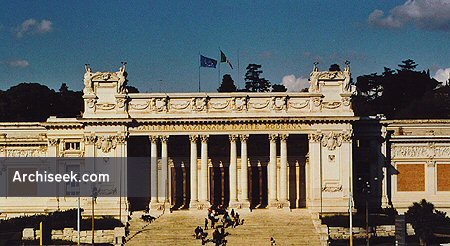 In 1911, Cesare Bazzani built in Valle Giulia the Palazzo delle Arti (Palace of Arts), where the Exhibition for the Silver Jubilee of the Unification of Italy was held, and the contemporary art collections were relocated in 1915. An additional floor was added to the building in 1934 in order to celebrate the decennial of the Fascist regime; the new section was to house works from official exhibitions such as the Biennial of Venice and the Quadriennial of Rome. A new enlargment, designed by Luigi Cosenza, was started in the 1970s and is under way.