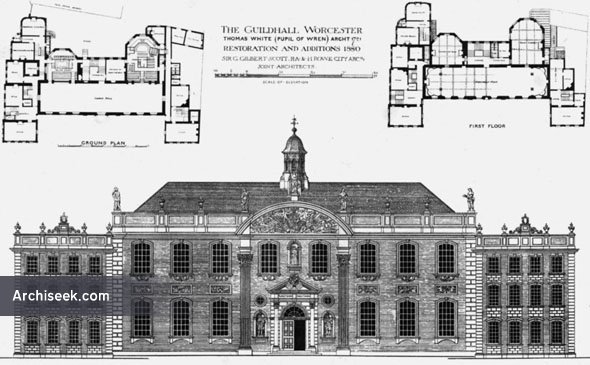 The Worcester Guildhall was originally built as a meeting place for Worcester merchants artound 1227. As with many other guildhalls, it became the centre for civic administration, a role it maintained after the merchant guild had disappeared.

The present Worcester Guildhall is a superb Queen Anne building, begun in 1722 by Thomas White, a pupil of Sir Christopher Wren. The exterior of the Guildhall is brick, dressed with stone. White himself is said to have carved the figure of Queen Anne over the entry, as well as those of Charles I and II, a reminder of the city’s long history of royal support.

There was some restoration & Additions around 1880 by Sir George Gilbert Scott & H. Rowe, the city architect.