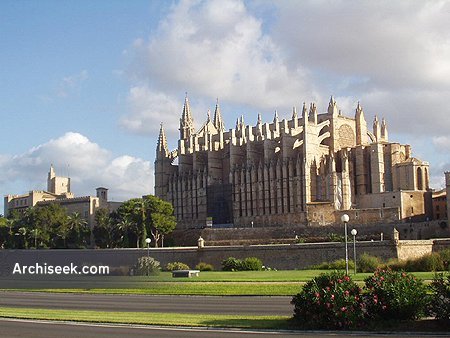 The Seo was build on the site of an existing Arab mosque. The legend has it that one night in 1229, as Jaime I was on his way to recapture Majorca, his fleet was struck by a terrible storm. He vowed to the Virgin Mary that if he survived the storm, he would erect a church in her honor. And after the storm had blown over, finding himself safe and sound, he immediately undertook the project. It was a vow that was to take a long time to fulfill. begun in 1230, the cathedral was finished in 1601.

Designed in the French Gothic style, the cathedral is 121 meter long and 55 meter wide. The main body of the church is set in the middle of a mass of pillars and spires, behind which lies the strong buttress reinforced with a double row of flying arches. The bell tower, still unfinished today, is 52 meter high with three stories. The main facade, which overlooks the Almudaina Palace, collapsed during a 1851 earthquake and was later completely reconstructed, with the exception of the Renaissance-era door which miraculously emerged unscathed.

The vast, airy interior is striking for its large-scale harmonious proportions. It features three naves resting on 44-meter tall octagonal pillars, eight chapels each side of the nave, and lacks both transept and ambulatory.

The rear interior reveals the majestic “Royal Chapel”, which is nearly as large as a church in its own right: 25 meter long and 16 meter wide. The columns are ringed with wrought-iron candelabra by Gaudi; his most controversial addition is the unfinished Crown of Thorns, fashioned from cardboard and cork and suspended above the altar.