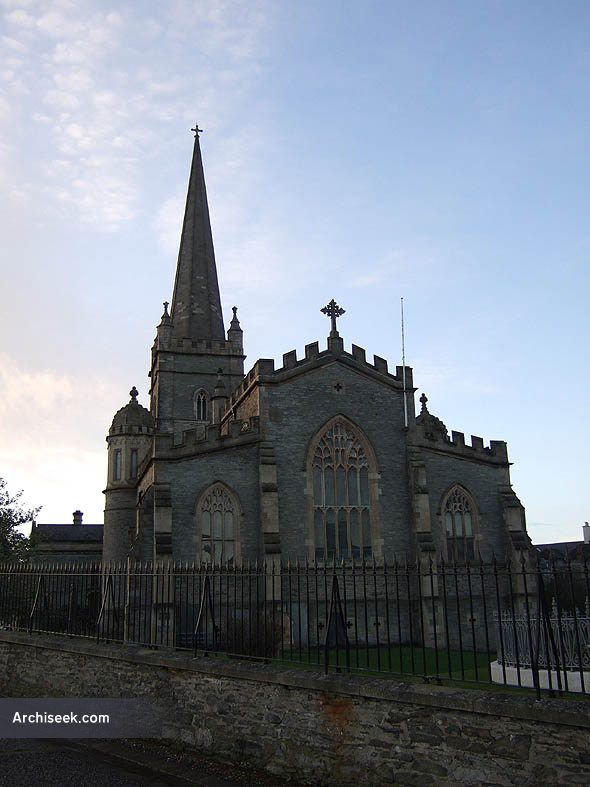 Described in ‘Tours in Ulster a hand-book to the antiquities and scenery of the north of Ireland’, published in 1854. – “The Cathedral, which is capable of seating one thousand persons with ease, stands upon the very summit of the hill of Derry ; it has no transepts, but is divided into central and lateral aisles, separated by pointed arches; in each of the latter there are galleries communicating with the organ-loft. The spire is 180 feet high from the ground, and 90 feet above the battlements of the belfry ; there are eight fine bells, which were suspended in the year 1813, as appears from an inscription at the entrance. The eastern window consists of five lights, divided by mullions, with one transom ; upon the sill there is an inscription recording the memorable siege in 1689- This inscription is so characteristic that we make no apology for its insertion : “This city was besieged by the Irish army the 13 April, 1689, and so continued until the 1st of August, when it was relieved by Major- General Kerk. On the 7th of May, about one in the morning, the besiegers forced the out-gards of the garison, and intrenched themselves on the Windmill Hill, commanded by Brigadeer Ramsay. At four the same morning the beseiged attacked the Irish in their trenches, and after a sharp engagement the enemy gave ground and fled. Eamsey was killed, with others of note. The Lord Netterville, Sir Garrett Aylmer, Lieut.-Col. Talbot, Major Butler, son to Lord Montgarrett, &c., were taken prisoners, with five colors, two of which fell into the hands of Col. Jno. Mitchelboune, who placed them as they now stand. . . . When the colors shall faile, his Lordship John Hartstrong, now Ld. Bp. of Derry, at the request of the said Col. M. is pleased to give leave that this inscription be placed under the said colors in remembrance of the eminent and extraordinary services then performed.” 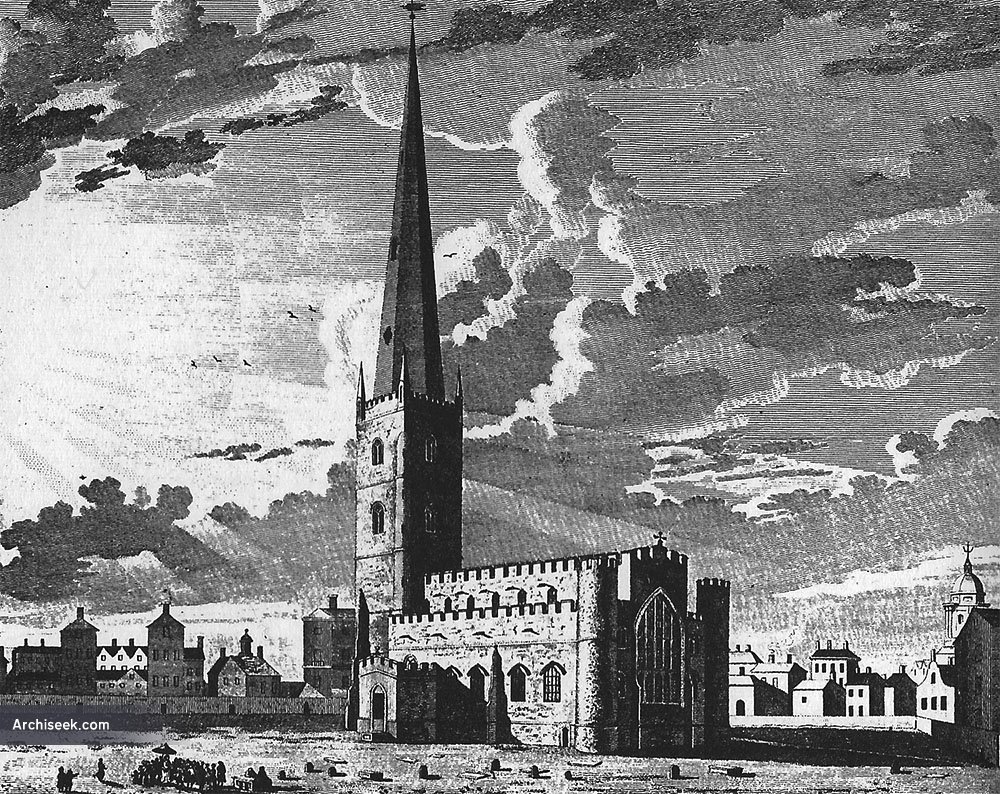 The flags stand at each side of the window ; the poles and tassels are genuine, but the flags have been re- placed more than once. The battlements are much frequented by strangers, from which there is one of the finest suburban views to be found in the kingdom. From this point the localities rendered famous in the siege can be easily identified, which imparts an interest to the scene not inferior to that excited by the beautiful landscape.

The monumental interest of the Cathedral and churchyard is considerable; many bishops, and several of the brave defenders of Derry, were buried there. The tomb of Counsellor Kairns, who distinguished himself in the siege, is much broken, but the greater portion of the epitaph is still legible. That of Alderman Lenox, who was also connected with the siege, is discoverable, and is marked by an appropriate epitaph. But the most interesting to us is that of the Rev. William Hamilton, the accomplished author of the ” Letters on the Coast of Antrim,” whose melancholy fate is recorded upon his father’s tomb. He was assassinated on the 2nd March, 1797, at the house of Dr. Waller, of Sharon, in the county of Donegal, by an armed banditti, in the fortieth year of his age.”