1872 – Design for English Church in Rome 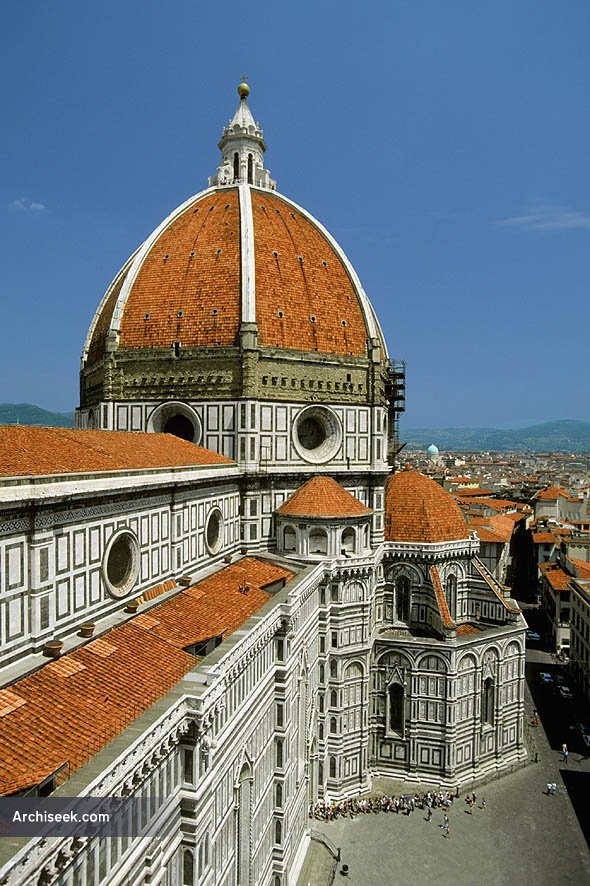 The new church was designed by Arnolfo di Cambio in 1296 (although the design was altered several times and later reduced in size). Arnolfo di Cambio was also the architect of the church of Santa Croce and the Palazzo Vecchio. He designed three wide naves ending under the octagonal dome, with the middle nave covering the area of Santa Reparata. The first stone was laid on September 9, 1296 by Cardinal Valeriana, the first papal legate ever sent to Florence. The building of this vast project was to last 170 years, the collective efforts of several generations.

After Arnolfo died in 1302, work on the cathedral slowed for the following thirty years. The project obtained new impetus, when the relics of San Zanobius were discovered in 1330 in Santa Reparata. In 1331, the Arte della Lana (Guild of Wool Merchants) took over exclusive patronage for the construction of the cathedral and in 1334 appointed Giotto to oversee the work. Assisted by Andrea Pisano, Giotto continued along di Cambio’s design. His major accomplishment was the building of the campanile. When Giotto died in 1337 Andrea Pisano continued the building, until work was again halted due to the Black Plague in 1348.

In 1349 work resumed on the cathedral under a series of architects, commencing with Francesco Talenti, who finished the campanile and enlarged the overall project to include the apse and the side chapels. In 1359 Talenti was succeeded by Giovanni di Lapo Ghini (1360-1369) who divided the center nave in four square bays. Other architects were Alberto Arnoldi, Giovanni d’Ambrogio, Neri di Fioravante and Orcagna. By 1375 the old church Santa Reparata was pulled down. The nave was finished by 1380, and by 1418 only the dome remained incomplete.

Work on the external marble revestment meanwhile continued as well as on the decorations around the side entrances, the Door of the Canonici (south side) and the Door of the Mandorla (north side), topped with a relief of the Assumption (1414-1421), the last work of Nanni di Banco (Donatello and Jacopo della Quercia also worked on this door). The problem of the cupola was still unresolved. Brunelleschi designed his first project in 1402 but kept it secret. In 1418 the Opera del Duomo announced the competition that Brunelleschi was to win though work did not start on it until two years later and was to continue until 1434. The cathedral of Florence was consacrated by Pope Eugene IV on March 25th (the Florentine New Year) 1436, 140 years after work on it first started.

The final touches that still awaited completion were the lantern (mounted in 1461) and the external revestment in white Carrara, green Prato and red Siena marble, which, according to the directions of Arnolfo, was to repeat the facings of the Baptistery and the Belltower and give uniformity to the style of the square, and, last of all, the facade. However it was necessary to wait until 1886 before this was carried out.