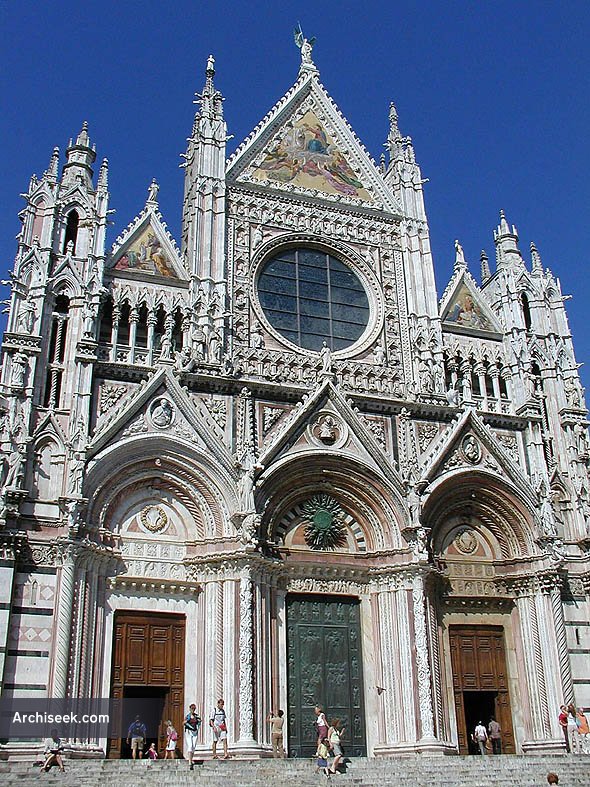 The Cathedral was originally designed and completed between 1215 and 1263 on the site of an earlier structure. It has the form of a Latin cross with a slightly projecting transept, a dome and a bell tower. The lantern, atop the dome, was added by the Gian Lorenzo Bernini. The nave is separated from the two aisles by semicircular arches. The exterior and interior are constructed of striped white and greenish-black marble, with addition of red marble on the façade. Black and white are the symbolic colors of Siena, derived from the black and white horses of the legendary city’s founders Senius and Aschius.

The façade of this cathedral was built in two stages. The lower part in polychrome marble was begun around 1284. It is built in Tuscan Gothic style by Giovanni Pisano, replete with gargoyles. Giovanni Pisano worked on the lower levels until 1296, when he suddenly left Siena. At that time, between 1270 and 1285, the nave of the church had been raised and a higher façade became necessary. Work at the façade continued for another fifteen years and was then stopped. Meanwhile in 1288, the rose window, a round glass-stained window set inside a square, was installed in the choir, based on designs by Duccio di Buoninsegna.

The three portals, surmounted by lunettes and Gothic pediments, were designed by Giovanni Pisano. The columns between the portals are richly decorated with acanthus scrolls, allegorical figures and biblical scenes.

Work on the upper part of the façade only resumed in 1376 under the direction of Giovanni di Cecco, working on a new elaborate design, inspired by the Orvieto Cathedral. It was to be erected much higher than foreseen, because the nave had, once again, been raised. The division of the upper part does not match the division of the lower part. The pinnacles of the upper part do not continue over the columns flanking the central portal. The weight of the elegant side towers was reduced by adding windows.