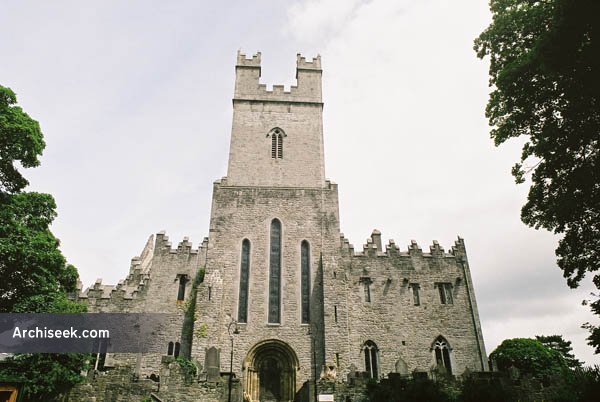 Construction on St. Mary’s Cathedral started in the 12th century, and was completed around 1194. The full title of this Cathedral is the “Cathedral and Parochial Church of the Blessed Virgin Mary”. It was started in 1172 by Donal Mor O’Brien, the last King of Munster. The design has strong indications of both Romanesque and gothic styles of architecture with Romanesque arches and doorways and gothic windows. The cathedral is not pure in any one style, with the plan and elevation giving the impression of the design being altered in the course of construction. The original plan of the church was in the form of a Latin cross. Additions were made to the Cathedral, two centuries later, during the episcopate of Stephen Wall, Bishop of Limerick. The Romanesque doorway on the west side is an impressive carving of chevrons and patterns. Like many medieval churches in Ireland, the building has been heavily ‘restored’ by the Victorians.

Between 1856-63, English architect William Slater restored the east end, adding a new east window as a memorial to Augustus Stafford. He also was responsible for a new roof on the nave and a southern transept.

The interior of the cathedral shows its medieval origins with its thick walls and piers supporting the wooden roof. The walls are relatively plain, having a rubble stone surface – any carvings or embellishments being kept for various screens and memorials set into the walls. Despite the thickness of the walls, the church is remarkably bright inside – due mainly to the larger windows inserted during various Victorian ‘restorations’. The building has many memorials on the walls of various luminaries and worthies from the vicinity.

Notable features of the interior are the carved misericords in the choir. These miserichords are unique in Ireland as the only surviving pre-Elizabethan carvings, and probably date from 1480 when Bishop Folan restored St. Mary’s. Of the 21 carvings, 16 are different, representing such mediaeval emblems as a two-legged one-horned goat, a griffin, a sphinx, a wild boar, an angel, a head resembling Henry IV, a dragon biting its tail, antelopes with intertwined necks, a swan, an eagle, the Lion of Judah with a dragon, and a cockatrice holding its tail.

Described in Lews,: “The cathedral, which is said to have been founded and endowed by Donald O’Brien, King of Limerick, and is dedicated to St. Mary, was enlarged by Donat O’Brien about the year 1200, greatly adorned by Bishop Eustace del Ewe early in the fourteenth century, partly re-edified by the citizens in 1490, much improved by Bishop Adams in the 17th century, carefully restored after the wars of the same century, and improved at various subsequent periods. It is a venerable Gothic building, in the English town, surrounded with graduated battlements, and has at the west end a square tower 120 feet high, containing eight bells, and surmounted by turrets at the angles.

The interior is composed of a nave and choir, separated from the aisles by pointed arches: the choir is 91 feet by 30, with a fine window at the east end: the bishop’s throne and the stalls of the dignitaries exhibit some curious carved work: there is a powerful organ. In the nave and aisles are several recesses, formerly endowed as chapels by various families; two of these now form the consistorial court and the vestry; and under the arches separating the aisles from the choir are galleries, for the corporation and the officers of the garrison.

At the communion table is a handsome modern Gothic screen. Among the numerous monuments, besides those of several prelates, the most remarkable is the splendid tomb of Donogh, the great Earl of Thomond, on the north side of the choir, composed of three compartments, of marble of different colours, and surrounded and supported by pillars of the Ionic, Corinthian, and Composite orders, and decorated with his arms and various trophies. There is also a fine monument of the Galway family.

The chapter consists of a dean, precentor, chancellor, treasurer, archdeacon, and the 11 prebendaries of St. Munchin, Donoghmore, Ballycahane, Kilpeacon, Tullybracky, Killeedy, Disert, Ardcanny, Croagh, Athnett, and Effin. The corps of the deanery consists of the rectory of St. Mary, the rectories and vicarages of St. Nicholas and Cappagh, and the rectories of Cahirnarry, Bruree, and Mungrett. The deanery lands comprise 80 ½ statute acres, let on lease at a rent of £88. 2. 5. and an annual renewal fine of £13: 16. 11.; the gross annual income, including these lands, is £1568; the deanery-house is in the city. The dean enjoys the right of presentation to the vicarages of Mungrett and Bruree, and to the perpetual cure of Cahirnarry.

The economy fund arises from the tithes of the union of Kilmallock, and the rents of several very valuable glebes, amounting on an average to £1400 annually. The diocesan school-house was erected in 1611 in the city; but having fallen into decay some years since, it was sold by the Board of Education, and the proceeds, with the addition of £400, presented by the corporation, have been expended in the purchase of a new site; but the house has not yet been built. In 1823, the Diocesan schools of Killaloe and Kilfenora were united with that of Limerick, and the income augmented to £150 per ann. The school is held in the private residence of the head-master.”