“Studies in the Gothic Revival” launched 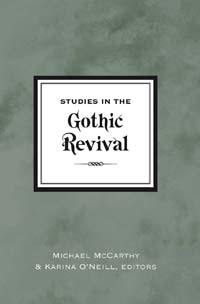 Studies in the Gothic Revival, edited by Professor Michael McCarthy & Karina O’Neill, contains the text and illustrations of ten papers delivered at a conference held in the Irish Architectural Archive in January 2005 to mark the retirement of Professor McCarthy. The conference was sponsored by the Archive, the Irish Georgian Society and the Irish Association of Art Historians and was co-ordinated by Karina O’Neill. The authors of the papers have all been associated with Professor McCarthy at University College Dublin or at the University of Toronto or in studies of the architectural history of Ireland.

The retail price is Euro 55.00 but there is a 10% discount online at www.fourcourtspress.ie.