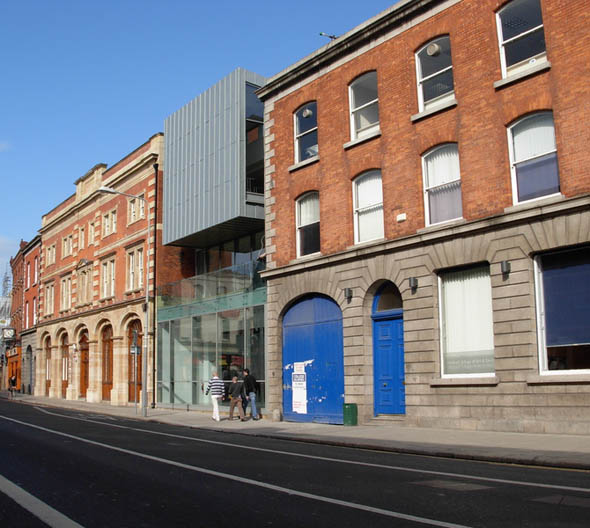 The Liberties draft Local Area Plan (LAP) is now out for public consultation. The vision is to make the Liberties a great place to live, work and visit. The draft plan will be on display in the Civic Offices, Wood Quay and the Digital Exchange, Crane Street until 11th November.
“The plan represents the culmination of an 18 month process involving workshops and meetings with Liberties residents, businesses and other stakeholders who have contributed to developing a vision and strategy for regenerating this historic 135 hectare area to the west of the city centre (extending from the south bank of the Liffey to Newmarket (off Cork St) and from Patrick Street to St James’s Hospital).” says Evelyn Hanlon Liberties Regeneration Project Manager, Dublin City Council. There will presentations and workshops throughout this period with a public forum on 28th October in Crane Street.

“The number of people living in the Liberties has already risen well above the 13,157 counted in the 2006 census and the development of a number of large brownfield sites could swell the total to between 19,000 – 20,000 over the next 10 – 15 years The LAP includes proposals for developing a high quality network of pedestrian routes, public squares and parks designed to improve the quality of life for the existing Liberties community and for the additional population the city hopes the area will accommodate as part of its strategy to avoid urban sprawl. In placing such a major emphasis on the quality of the public realm the City Council is seeking to enrich opportunities for public life in the city.” says Dick Gleeson, Dublin City Planner.

“As well as being famous for its markets and people, the Liberties is rich in archaeological and architectural heritage (residential, ecclesiastical and industrial). The plan includes measures to safeguard the built heritage and encourages innovative re-use of protected structures for 21st century requirements and advocates the designation of the eastern part of the Liberties, including the Coombe and Thomas Street, as an Architectural Conservation Area (ACA).” says Mary Teehan, Dublin Civic Trust who prepared the ACA for the council.

“The draft plan addresses the controversial issue of heights by identifying key views in and out of the area which must be protected. The plan sets an upper limit of 8 storeys except for the Digital Hub and Grand Canal Harbour where some additional height is considered appropriate where it can be integrated with the historical high shoulder of the Guinness brewery structures. A case for height near Heuston, as part of a cohesive urban design for Heuston’s redevelopment is also made. The draft plan sets out urban objectives for each character area which in some cases further restricts height.” says Clare San Martin, John Thompson and Partners who along with Metropolitan Workshops were consultants in the preparation of the plan.

A new rail interconnector station at Heuston is proposed by Iarnrod Eireann connecting Connolly via a station at Christchurch. The route is shown in the draft plan. The RPA have also identified a number of route options for Luas through the Liberties. The one that the local community and council prefer would see the restoration of a tram route down Thomas Street to Stephen’s Green connecting up both the red and the green lines. A biodiversity audit undertaken as part of the development of the draft LAP showed that 91% of the area is currently hard-surfaced and only 2% is given over to green spaces accessible to the public. The proposals will significantly address this deficit and promote biodiversity and environmental sustainability.

Dublin will gain a new inland quayside destination at Grand Canal Harbour (renamed St James’s Harbour) when the old harbour walls are revealed and water is reintroduced. A cluster of higher buildings will signify the presence of a new city destination on the skyline while at ground level the proposal will recreate the layout of the former harbour. ‘Quality of architecture affects quality of life. It will be an essential throughout the implementation of this Plan that new architecture is clear, generous, appropriately scaled, positive to context and well made.’ Says Ali Grehan Dublin City Architect

A further benefit proposed by the draft plan is a 20% (316) increase in the quantity of social housing in the area. These new units will be spacious and of a high quality and will provide for families and people with disabilities. says Ciaran McNamara, Assistant City Manager for Housing Dublin City Council.

The draft LAP aims to improve the economy of the area by supporting the development of the Liberties retail offer, street markets, and creative and knowledge based industries including digital media. The plan will support and exploit the presence of Digital Hub which has already 100 companies in the area and is likely to expand beyond its relatively small existing site area. Tourism is also important to the local economy with over 800,000 visitors to the Guinness Storehouse last year. The plan promotes the development of new hotels, cafes, bars and restaurants and designated routes for horse and carriage drivers from the area. The restoration of the historic Iveagh Market and the regeneration of Newmarket as a dynamic retail and performance space will help to put these traditional market venues back on the map. The draft plan also proposes the restoration of the Dutch Billy on Mill Street which is one of only a few remaining in Dublin The opening of the new NCAD gallery on Thomas St will bring an added cultural focus to the street. Thomas, Meath and Francis Streets which are all in the proposed ACA area will also benefit from substantial public realm improvements, in the case of Thomas Street these improvements will be in time for the 250th anniversary of Guinness in 2009.

In April this year Diageo announced their decision to rationalise their operations and release land for development. The draft LAP includes proposals for re-integrating these redevelopment sites, along Victoria Quays and around St James’s Gate into the wider city fabric. A new pedestrian bridge over the Liffey is proposed to link Victoria Quay on the south side with Croppy’s Acre on the north side. Various routes linking Digital Hub with Grangegorman will help promote synergies between these new knowledge economy magnets.

Another proposal is to create a high quality pedestrian promenade along the south bank of the river leading to Heuston. West bound traffic will be diverted down a new road running parallel to the river connecting up with Johns Road West, thus creating an enhanced setting for the fine 19th century facade of Heuston Station. The introduction of a car free zone at Heuston Square will allow this fine building designed by the architect Sancton Wood (1846) and based on an Italian palazzo to be properly appreciated.