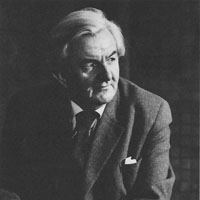 Liam McCormick (1916-1996) was close to being Ireland’s Alvar Aalto. Like the great Finnish architect, he was a committed but not doctrinaire modernist who found inspiration in the context of place and produced some of the finest buildings of the 20th century, working mainly in his own country. He also shared Aalto’s passion for boats and water. As he said himself in 1955, “I represent a generation who have been trained to think of architecture as the result of a particular building problem, irrespective of time or place, being done well. By ‘well’ I mean using the most suitable methods and materials of the time or place and using them with all the intensity of effort and sincerity of feeling that one can bring to bear . . .” There isn’t a single word of McCormick’s straightforward approach with which Aalto would have disagreed. And incidentally, there’s another bizarre link: the stone cladding on McCormick’s Met Office in Glasnevin, Dublin, curled up like stale sandwiches just like the Carrara marble cladding on Aalto’s Finlandia Hall in Helsinki, and replacements had to be found in both cases. In fairness to McCormick, he had specified Welsh blue slate for the striking pyramid he built on Glasnevin Hill. “The next thing, there were questions being asked in the Dáil about the use of imported materials in a public building. We had to find an alternative material, Ballinasloe limestone,” he recalled in a revealing interview with architect Shane O’Toole, recorded in 1991.