The Royal Canal Linear Park, which has been designed by Paris-based architectural practice, Agence Ter, will feature floating gardens, playgrounds, pavilions, new bridges and sporting facilities. The park will provide a visually striking public amenity green space covering six hectares in the North Lotts area of the Docklands. Agence Ter’s design blurs the separation between bank and canal, and considers the body of the park as a whole, treating it as a single space stretching from North Strand Road to the River Liffey. It incorporates a series of gardens for a variety of native and exotic plants and trees suited to either wet or dry conditions interspersed with areas for activities – a skate park, a children’s playground, a kayak centre, and multi-sport platforms, and for contemplation/relaxation such as seating areas, water basins and café pavilions. The Park will also be well lit to ensure that it can be enjoyed during evening and night times.

One of the main features of the Royal Canal Linear Park will be the floating gardens. While they will be moored to the canal banks, the gardens can vary in placement, arrangement or density according to the seasons. This flexibility will allow the project to adapt to changing urban requirements. Another significant element will be the Park’s pavilions, which will be semi-transparent boxes that change in opacity or transparency according to the shifting position of the viewer. From the exterior, passers-by will be able to get a feel for the atmosphere inside, while those in the interior can view the gardens. 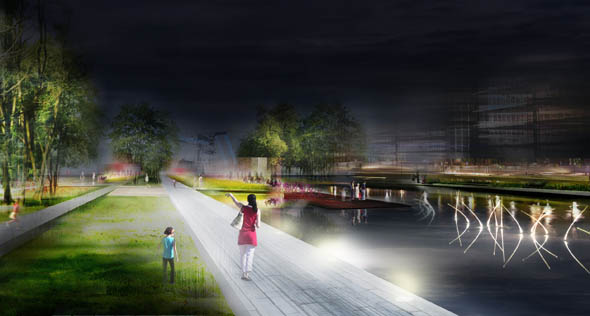 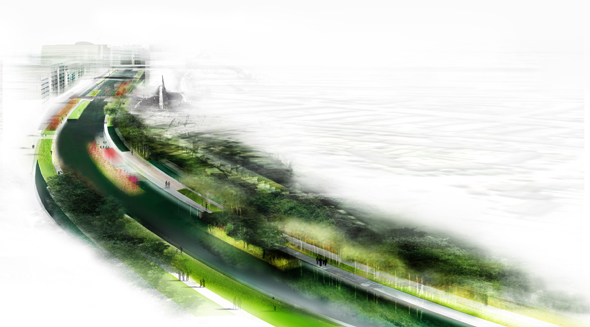 “The Royal Canal Linear Park will be a major asset in the North Lotts area of Docklands. It will create a new space for the city that will be modern, innovative and highly user-friendly. This is a park that has been designed to be used and appreciated by all of Dublin’s citizens whether they want to relax, be active or appreciate the greenery. It should prove to be a great resource for the area,” said John McLaughlin, Director of Architecture, Docklands Authority.

“The design for the Royal Canal Linear Park is truly unique and will reflect both the area’s heritage of Canal activity and its growing modernity. The Park will bring this stretch of the Canal alive and is sure to become one of Dublin’s most popular leisure resources,” said Paul Maloney, Chief Executive, Docklands Authority.

The Royal Canal Linear Park will run for one kilometre from North Strand Road to where the canal joins the River Liffey at Spencer Dock. The land required for phase one of the park running from North Wall Quay to Sheriff Street has been provided by CIE and Spencer Dock Development Company as amenity space associated with their development under the Docklands Authority’s planning process. The site for subsequent phases is expected to become available as development continues north of Sheriff Street up to North Strand.

Agence Ter’s design was chosen following an international landscape design competition, which was promoted by the Docklands Authority and run by the Royal Institute of Architects of Ireland (RIAI). Candidates were asked to design a park with public amenity green space and facilitates for youth recreation assuming a construction budget in the region of €15 million. The Jury for the competition included representatives of the local community, Dublin City Council, Spencer Dock Development Company, Waterways Ireland, The Royal Institute of Architects in Ireland and the Docklands Authority.

Agence Ter is an award-winning landscape architectural practice. Founded in 1986, it has won numerous architectural and landscape prizes in France and has designed public amenity spaces for the cities of Paris, Geneva, Cannes, San Sebastian, Zaragoza and London. Agence Ter won the Grand Prix National de Paysage 200 in January of this year.

Other design team members include Coup d’Eclat lighting designers, Arup civil and structural engineers, Delap and Waller services engineers and Healy Kelly Turner Townsend quantity surveyors. Construction of phase one of the Park is planned to begin at the end of this year and be completed by mid-2010.