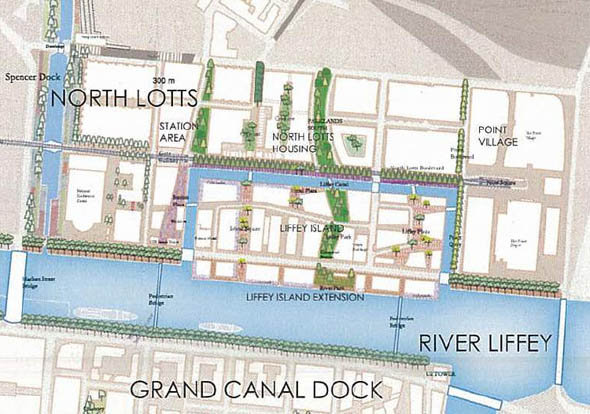 The Dublin Docklands Development Authority (DDDA) looks set to go ahead with a major infill and high-rise scheme called Liffey Island in the North Lotts area. The land is then likely to be developed to include 15 to 17 tall buildings of more than 12 storeys, including ground floor shops, four to five storeys of offices overhead and residential units on top of that. The development would straddle North Wall Quay between the East Link Bridge and the Santiago Calatrava bridge, which is running years behind schedule. It would include towers being built on stilts in the Liffey, something that is likely to draw widespread opposition, given the tradition of quays in Dublin having buildings set back from the quay front with a roadway and footpaths between them and the river. It is generally accepted that the design of the north docklands in particular was too low, creating a repetitive and boring skyline. Plans by the DDDA such as The Watchtower at The Point Village, the U2 Tower and the Anthony Gormley sculpture planned for the Liffey are designed to address that.