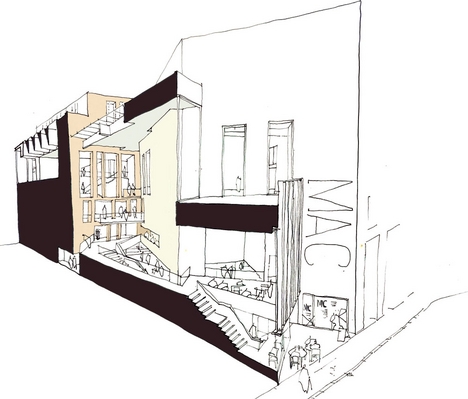 Belfast firm Hackett Hall McKnight have won the Young Architect of the Year 2008 award. Formed by Alastair Hall, Mark Hackett and Ian McKnight, in 2003 in Belfast after they had worked abroad, the firm has established a highly impressive portfolio of projects in the last five years. They have also demonstrated a determination to foster a re-energised building culture in a city that has not been the most receptive of environments to modern architecture in the past. The partners were joint authors of the first comprehensive survey of post-war Ulster architecture, published in 2006, and the practice has also found success in steering policy-level discussion about Belfast’s public space provision.

Next March will see construction begin on the practice’s first public building, the £14.2 million Museum Arts Centre in Belfast’s Cathedral Quarter. Won in open competition last year, the building incorporates 1,000sq m of galleries, a dance studio and two auditoriums. These spaces are configured in three volumes, between which the architect has woven a soaring foyer. The proportions of this space and the robust materiality of the walls that line it recall the character of the narrow streets that make up this part of Belfast.

The judges found the relationship between this architectural proposal and the practice’s investigations of Belfast at an urban scale particularly compelling. “This is a practice making work that will be listed in years to come,” said Glenn Howells, chairman of the jury. Hackett McKnight Hall was the unanimous choice to win BD’s 2008 Young Architect of the Year Award.