Arnotts plan for ‘Northern Quarter’ rejected by board 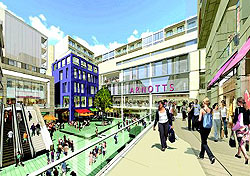 Plans for a new “Northern Quarter” on the site of Arnotts department store in Dublin will have to go back to the drawing board following the rejection by An Bord Pleanála of several major elements of the development, including a 16-storey tower. The board has told Arnotts that the plans could not proceed in their current form and has directed them to reduce the height of the tower by nine storeys and ensure that no other building in the development was higher than seven. In its letter to Arnotts, the board said the development would be “unduly obtrusive on the skyline” and would “seriously detract from the balance and architectural coherence of these streets”. The wording of the board’s letter is a powerful signal that it will not allow any high-rise buildings in the historic core of the city. While it is sure to come as a major blow to Arnotts who had its plans passed almost in full by Dublin City Council last year, it also sets a marker for future developments in the area, including the redevelopment of the Carlton site a short distance north of Arnotts.