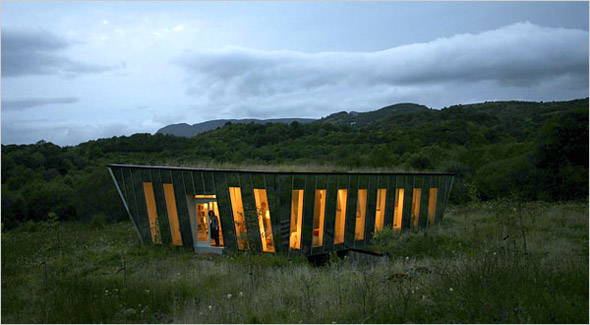 One afternoon in August, in this rural village in County Leitrim in Western Ireland, Grace Weir and Joe Walker climbed the nearest hill visible from their living room. It was only a mile away, but when they reached the top and looked back toward the house, they could not see it. Covered on all sides with tilted glass that reflects its green surroundings, and topped with a grass roof, the 1,500-square-foot house had disappeared. “It took us 15 minutes,” Mr. Walker said. “Eventually we spotted it.” The house is almost as hard to find on Google Earth, where it is delineated only by mismatched grain in the meadows that looks like “a bad Photoshop job,” as Ms. Weir put it. When Ms. Weir and Mr. Walker, married artists who lived in a Dublin apartment for five years, decided to build a getaway on the scraggly sloped plot in 2001, they knew only that their budget was limited to 50,000 Irish pounds, or about $60,000, and that they “wanted to build something ambitious and counterculture,” Mr. Walker said.

“Everybody told us the planning permission would be a nightmare,” Ms. Weir added. Although Ireland’s relatively new prosperity has led to a spate of home building in the last decade, planning commissions have not rushed to embrace innovative architecture. The dominant model for the appropriate rural house — a thick-walled, pitched-roof cottage — was set in 1972 by the house-pattern book “Bungalow Bliss,” by Jack Fitzsimons, which has been reprinted many times and has become a bible for both developers and planners.