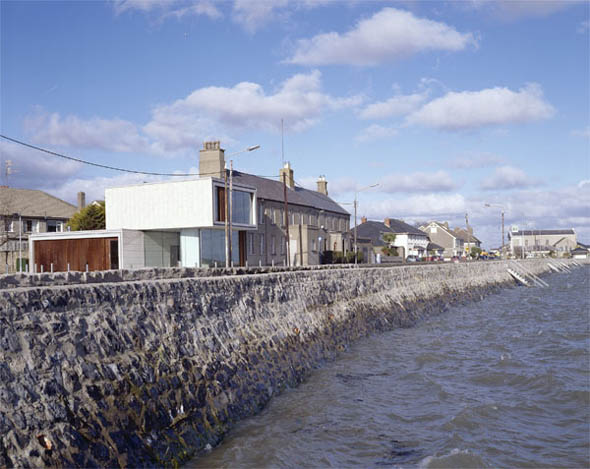 Text © Shane O’Toole. Photos © Paul Tierney. Drawings © FKL Architects. A fuller version of the piece first published in The Sunday Times, May 22, 2005, as “Time to think outside the box”

A new wave is washing through Irish architecture. The tide is high and the generation now approaching 40 is making its mark, the first to do so for almost 20 years.

New trends have been evident since the turn of the millennium, but the recently announced results of the Architectural Association of Ireland’s annual awards – when the Downes medal, the AAI’s premier prize, was presented to Boyd Cody Architects for a cuboid mews house in Monkstown in south Dublin – marked if not a changing of the guard, then a generation’s coming of age.

The new generation’s best buildings are characterised by a faith in abstraction, an emphasis on concept and a suspicion of the figuration, symbolism and subjective narratives that underpinned much of the leading Irish architecture of the past two decades. They conceive their buildings as objects – basic forms given an unusual scale and built from a stripped palette of materials.

One of the buildings that announced the arrival of this new approach is a delicate piece of architectural origami on the seafront at Baldoyle in Fingal, north Dublin, overlooking Ireland’s Eye. A small, reserved public building that is lower than its neighbours, it could not be further removed from the tradition of exotic seaside architecture, yet it mysteriously projects a bigger presence than anything around.

Designed by FKL Architects, the idea for the Baldoyle library and local area offices originated about five years ago when the former county manager decided there should be outreach offices in Fingal’s three main centres: Howth-Malahide, Swords-Balbriggan and Castleknock-Mulhuddart.

Baldoyle was chosen as a good compromise location between Howth and Malahide. The council owned the properties – an old Royal Irish Constabulary barracks that was in use as a part-time library and the grassy site beside it.

FKL were in practice less than a year and had built nothing when David O’Connor, the county architect, phoned them up and asked them to interview. The site was tiny. There was no firm brief but the council wanted a building with civic presence and an open feeling to it that would help deliver local government locally.

“FKL showed a greater sympathy and understanding of the site than anybody else,” says O’Connor. “From the way they talked about how the project could reinforce the Mall, we knew this had the potential to be more than just a little library.” He says he had “no anxiety at all about their lack of a track record of delivery. Remember, Bucholz McEvoy were designing the council’s headquarters in Swords at the time, which was their first building, too, and everything there went as well as anyone could have hoped for.”

Baldoyle is a sleepy suburban village, defined by sober 19th-century architecture with sand-rendered walls and plain dark roofs. The urban quality is poor, its lack of architectural excess extended only by dullness throughout the 20th century. One end of the village is anchored by the church and a small green space. FKL set out to provide a counterpoint, within sight of the church, through a new civic building, fronted by a broad stone-paved area on the Mall that could be used for impromptu community events.

The library in the former barracks was only one room deep. The existing structure could not support the additional spaces needed for the council. “The library was like a found space,” says Paul Kelly, the K in FKL. “We just cleaned it up, increased the available space, closed off the old stepped entrance and dropped the floor level to provide better access.”

It has been transformed. Now open 56 hours a week, it hosts two book clubs, a toddler group, an Irish conversation group and English conversation classes for foreigners in the evenings.

All of the new accommodation – a reception desk, an exhibition space, stairs, lift and lavatories, offices for the local councillors and a large room for public meetings that can be used when the rest of the building is closed – is ingeniously slotted in to what Kelly calls a “manipulated tube.”

The concept is simple. A concrete tube is stretched, looped, folded and wrapped around the back of the old barracks to house everything that is needed. “We were looking for an idea that could sustain itself throughout the process of design and construction,” says Kelly. The tube makes sense because much of the new accommodation is circulation space.

“Architecture should be about a clear concept,” he says. “It’s important to us that the work is concept driven, not compositionally driven. Every decision, whether it is about the choice of materials or the handling of junctions is checked against that idea. We try to have a sketch as a touchstone, not necessarily to do with what the building looks like, but so that everybody in the office knows what we’re working towards.”

Facing the shore, two elegant, stone-clad boxes slide under and over each other, sheltering a light, glass-walled exhibition space at the corner. The building performs a precarious balancing act, made possible by thin columns hidden from view within a slender lightbox on the ground floor.

On the Mall the tube is wide enough to provide an entrance lobby and offices to one side for the six local councillors. The offices face a gravelled courtyard that lacks the zen quality it could have if planted with a single specimen tree. The courtyard gives breathing space to the houses behind, while the blank walls of the narrowed tube, which provides access to the library and upstairs, preserve the privacy of the back gardens.

The tube bends back on itself, vertically, to accommodate the stairwell and first floor corridor, before cranking to the left towards the sea and the meeting room with its spectacular view of Ireland’s Eye, Portmarnock golf links and Howth Harbour.

The projection of the meeting room towards the sea takes its cue from the thrust-out entrance porch that was previously the library’s front door. Here is the one big disappointment: the picture window, as wide as a house, is crying out to be made from a single sheet of glass. But double-glazing doesn’t come that big.

The building’s doors and windows are thought of as the cut ends of the snaking tube, which is clad externally in honey granite. The stone pattern changes direction with the folds in the tube. The stone on the sides of the tube is rough from sand blasting; around windows and doors, the “cut” ends of the stone are polished. Internally, floors are of oak, which is also used to line the walls and ceilings of the public areas of the building.

The tube concept creates a fine balancing act, with different parts of the building apparently receding, projecting and sliding beneath the other. The projection of the meeting room towards the sea takes its cue from the thrust-out entrance porch that was previously the library’s front door. A glass-walled exhibition space, its framing reduced to almost nothing, shelters in the corner beneath the cantilevered meeting room and helps animate the building at night.

“We resist imposing an aesthetic on our buildings,” says Kelly. “We let the concept dictate the solution to each situation and whatever beauty is in it emerges as a natural consequence of those choices. Over time, when people live with it long enough, we hope that the honesty of its making will show through.”

One of the truths of architecture is that if it looks simple, it has been difficult to achieve. “God is in the details,” declared Mies van der Rohe, one of the giants of the modern movement, and so is the devil. This architecture would be instantly undone by a sloppy junction where two materials join.

FKL collaborates regularly with Bruce Darrell, a Dublin-based Canadian architect whose elaborate computer renderings it uses as a form of rapid prototyping, much as industrial designers would. Darrell, who decided early that he didn’t want to be a general practitioner in architecture, learned his skills at Alias, the Toronto-based company that developed Maya, the leading software package used in animated movies such as Terminator 2 and The Incredibles.

“Bruce’s digital images are so realistic it means we don’t have to use our imaginations to fill in some of the detail, like you do with traditional architectural drawings,” says Kelly. “Bruce helps us clarify what’s in our mind’s eye. We developed the colour and pattern of the stone cladding that way. Then the detailing of the cut ends wasn’t precise enough and when we saw that in the images, we had a chance to correct it before going on site. You still get that joy when it’s built though, especially with diagonal views from one space to another. They sustain your interest and reward the level of effort needed on site.”

FKL’s relentless and rigorous pursuit of abstraction and concentration owes as much to the work of artists such as Donald Judd and Sean Scully as it does to architectural antecedents. Perhaps that is what grants this little object its remarkable power. It bows to the surrounding domestic scale but uses its stony, horizontal, linear form to exert its presence.

More than this, it creates a sense of place. It marks the point where Baldoyle begins.