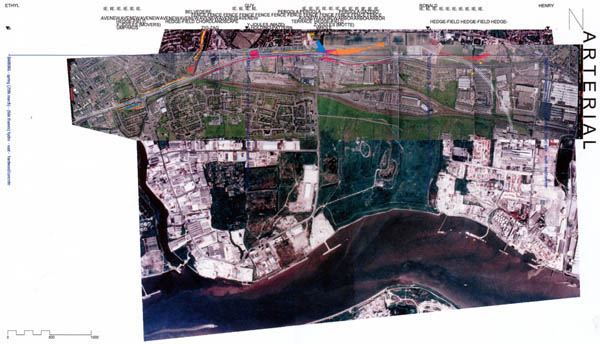 The 1980s was a dismal decade for Irish architecture. All the exciting construction projects were in civil engineering, particularly the dramatic new motorways, arterial roads and bridges. Their landscape-transforming scale was awe-inspiring, but something fundamental was missing. Where was the vision to match the expenditure? There must be more to roads than tarmac.

Disengaged from the infrastructural process, architects felt envious and threatened. One prominent architect, nominated for the Irish Concrete Society’s annual award – in which buildings and civil engineering structures compete in a single category – said, memorably, that he would hate his, admittedly modest, building to be “beaten by a runway” at Dublin airport.

Sculptors were involved in the new national routes, however, through the percent-for-art scheme, which allocated to artworks 1% of the construction budget of public works, up to a maximum of £20,000. The results were decidedly mixed. Artists such as Eilís O’Connell and Michael Warren have deservedly earned international reputations for their large-scale pieces, but many public commissions of the 1980s and 1990s fell to lesser talents. The results were often decorative – in the most superficial sense of the word – lacked an appropriate sense of scale or, sometimes, both. The infamous “turd on the plaza” syndrome found a new lease of life in the Irish countryside, at roundabouts and bridges.

Now a project in east London, across the Thames from the Millennium Dome, is about to show us what we have been missing all these years.

Led by Barking and Dagenham council, and running until 2003, A13 Artscape is a huge public-art project whose aim is to link a series of open spaces along a three-mile stretch of the A13 arterial corridor with works by local, national and international artists and designers. With a budget of almost £9 million, the project includes landscapes, parks, planting, footways and lighting. The money has come from the Highways Agency, urban-regeneration budgets and local businesses, as well as £3.9m of lottery money from Arts Council England, its largest-ever award for a public arts project.

The master plan for the scheme is the work of Tom de Paor, a Dublin-based architect. He began in 1996 with the notion that the journey along the A13 should be like a musical composition, complete with rhythms set against “events” at major junctions. The first of those events, Holding Pattern, will be unveiled on Tuesday. Designed by de Paor in collaboration with the artists Graham Ellard and Stephen Johnstone, it is a three-dimensional “light garden” that cost £650,000 and is 70 metres long, 50 metres wide and 6 metres high. Only Anthony Gormley’s Angel of the North is a bigger public sculpture.

De Paor describes Holding Pattern as “the Campidoglio of Barking, even though you can’t stand there.” Situated at the Ripple Road overpass, where the A13 meets the line of the old Roman road that skirted the Thames flood plain, Holding Pattern takes its name from 74 stainless steel “needles”, each topped with a blue runway taxi light. It can be seen from the air on the approach to London City airport.

Six kilometers of granite paving strips, each measuring one metre by 30cm by 30cm, mark out the ground, which is covered with Goplar, a plastic mesh that permits grass to grow through it while providing a surface for maintenance traffic. Five pencil-thin “Greenspire” trees, which are the beginnings of an avenue that will eventually extend for 2km, complete the composition.

De Paor’s route to east London was a circuitous one. In 1993-94 he was architect-in-residence at the National Sculpture Factory in Cork, where he met O’Connell. In 1995 they collaborated on a glorious proposal for a railway footbridge and pavilion – sadly, not built – at Four Oaks in Birmingham.

But all was not lost. The following year that project earned de Paor an invitation to interview for the A13 project, which was tied in with the construction of three new junctions. There was no particular brief; he was simply asked to think about the A13 – which carries 60,000 vehicles per day in each direction – and the way its boundaries should be treated, which he did, for six weeks.

Following the first world war, the north side of the road became the site of Europe’s largest public housing project, the Beacontree Estate – “Homes for Heroes” laid out according to Ebenezer Howard’s garden city principles. The area quickly filled up with industry, including Ford’s Dagenham plant, which will soon close.

De Paor embarked on a huge range of collaborations and public meetings, negotiating sites and permissions. He was particularly struck by meeting an elderly woman who lived in one of the tower blocks. She told him that when she was young she used to go down to the river and watch the boats go by. Now confined to her flat, she sits and watches the traffic on the A13 from her high-rise window.

“Rivers today are de-industrialised, picturesque,” says de Paor. “But the roads are full of life. Could you choreograph this?” he wondered. “Could you, through engineering the landscape, make it “place” enough at 50mph – make it charged enough, for the passing motorist? Could you, through fiddling around with some junctions and a few spaces in between, make a new image for Barking and Dagenham?

“The key to the right solution lies in being able to ask the right questions. One discipline alone cannot do it,” he says. “Collaboration is based on trust. You have to give away a lot, but you get back a lot more in return.” An enormous range of projects is now beginning to flow from A13 Artscape: a new town square, a library, a gallery, refurbishment of the Underground station and a raft of community projects, as well as the works associated with the road itself.

“The real point of the A13 work is to raise questions about public art and about percent-for-art,” says de Paor. “How can society get better value for money out of what is a very low level of practice, particularly around civil engineering works?”

De Paor’s is the most original talent to emerge in Irish architecture in the past 10 years. It should be put to work at home, sooner rather than later.