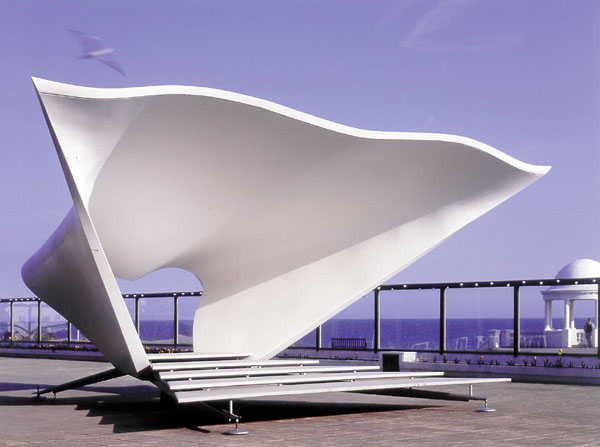 Two years ago, when Niall McLaughlin won the inaugural Young British Architect of the Year award, he was working from his living room. Now the London-based Irishman runs an office of four and has work in Britain, Ireland and Sweden. His ambition, he says, is to keep his practice small and continue to balance conventional work with the experimental architecture for which he is known.

Just a decade after setting up in practice, McLaughlin’s diverse portfolio of work includes a competition-winning bandstand at the De La Warr Pavilion – Eric Mendelsohn and Serge Chermayeff’s socialist pleasure palace in Bexhill-on-Sea, East Sussex, built in 1935 – and houses in the Chiltern hills and overlooking Hyde Park, London. In Cork, at the City Hall, he is providing public facilities for a new concert hall.

Born in 1962 in Geneva, Switzerland, where his parents worked for the United Nations, McLaughlin grew up in Ireland and studied architecture at University College Dublin, before settling in London in the late 1980s. Like many of the best architects, his work is based on a combination of commissions and speculative projects, each informing the other. His best known work, dripping with alien charm, is Shack, near Kettering in Northamptonshire. It was designed as a speculative project, then presented to the prospective client as a photo collage.

Most of McLaughlin’s projects are developed in relation to particular narratives. In many cases, the history of the site is the starting point for his architectural speculations. “It is important that these stories are absorbed into the architecture,” he says. “They are ways of bringing the project into being, not of explaining it when it is there.”

The site of Shack is an old pond on farmland, used as a American reconnaissance air base during the second world war and, later, as a nuclear missile base. The client, Gina Glover, takes still-life photographs of natural objects set against veils of light. “We discussed the possibility of oxygenating the stagnant water, using fish, water plants and filtration to attract dragonflies,” he says. “We developed a design by comparing the camera lens hovering over the water, capturing images of insects, to the reconnaissance flights from the base bringing back images from remote landscapes.”

McLaughlin works with a small number of builders and craftsmen. Unusually, he discusses all of his designs with their makers, not just in terms of performance, but as aesthetic propositions. “A good builder generally has a good eye,” he says. McLaughlin’s early collage for Shack is a dark, wing-like form at the edge of a pond – intended to fix an image of the building before it was analysed as an architectural proposition. One of his regular collaborators, Simon Storey, liked the image and the story of the site. His father had been a Spitfire pilot, flying reconnaissance during the war. “We discussed ways in which the building might be made using very simple materials,” says McLaughlin. “Simon agreed to build it for £15,000 on the condition that no construction drawings were produced.”

Models and photographs of models were used to design, explain and construct the building. Large models were kept on site. “Models allow me to invent a building which changes constantly as you move through and around it,” says McLaughlin. “They also open out the development process, making it available to all of the participants.” The brief expanded as it encountered family democracy. Gina’s partner, Geoff, wanted a sauna and the children wanted a bed to make Shack a retreat from the house. “When a client changes or develops the programme during the design, it is initially frustrating for the architect, who is formulating an order out of the existing programme,” says McLaughlin. “But it is also the moment when the project is most alive, laid open to inventive change.”

The structural design was seen in terms of stopping the building from floating away, rather than keeping it standing up. The roof is of plywood, fibreglass, polycarbonate and galvanised, perforated metal, tethered by slender steel rods that maintain a slight inbuilt bow in the flat sheets that form the canopies. The roof is allowed to flap, flex and deflect in the strong winds that buffet the site.

McLaughlin is less interested in the expression of technology by bolts, junctions and gaskets – the paraphernalia of English high tech – than in the overall presence of a space; in particular, the way in which materials alter space by modulating light – combing it, diffusing it, storing it, reflecting it, dulling it or changing its speed. “I am a photographer,” says Glover, “and Niall and I both work with light. The best bit about the architecture of Shack is its use of light. When the light changes, I feel as if I have many different buildings, shifting all the time. Reflections bring the landscape into the interior, so the building seems to gather up its surroundings by capturing light.”

With a decade of great achievement behind him, McLaughlin is not yet 40. “The role of the architect is to produce rich and mysterious places and to constantly reinvent the world,” he says. “When you imagine something new and persuade everyone to take part in making it, then contingency and speculation are held in balance. That is when practice is at its best.”