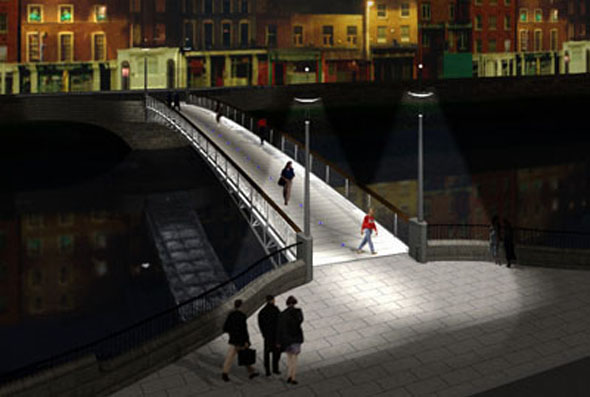 The new Liffey Pedestrian Bridge will provide a link between Lower Ormond Quay on the north bank and Wellington Quay on the south bank of the river Liffey in Dublin. It will be located approximately halfway between the Grattan Bridge and the Ha’peny Bridge.

The purpose of the new bridge is to relieve congestion on the Ha’penny Bridge, to assist the western extension of Temple Bar and to create a major north-south pedestrian route. This new route will link the exaitng shopping areas of the Henry Street, Liffey Street and Abbey Street area with those west of Grafton Street, including Georges Street.

The bridge and pedestrian route are considered to be of major strategic importance for both the city centre and the retail section of the north inner city in particular. It will also assist in the development of the HARP area. The construction of the bridge and the creation of a new pedestrian route from Ormod Quay to the Jervis Centre are objectives of the 1991 City Development Plan (as recently varied by the City Council).

The commission for the design of the bridge was the outcome of an international competition which attracted 153 entries. It was promoted by Dublin Corporation entitled “A Project for the Millennium”. The winning entry was designed was designed by the Dublin firm of Howley Harrington Architects in association with Price & Myers Engineers.

Although the new bridge is a dynamic contemporary design, it captures the spirit of the Ha’penny Bridge being simple, lightweight, transparent and structurally daring. It is planned to fabricated the bridge off-site as a single piece, complete with all finishes and lighting, and float it upstream from the docklands to be lifted into position onto the new abutments using a single crane. This will avoid disruption or road closures along the busy riverbanks during peak traffic hours. 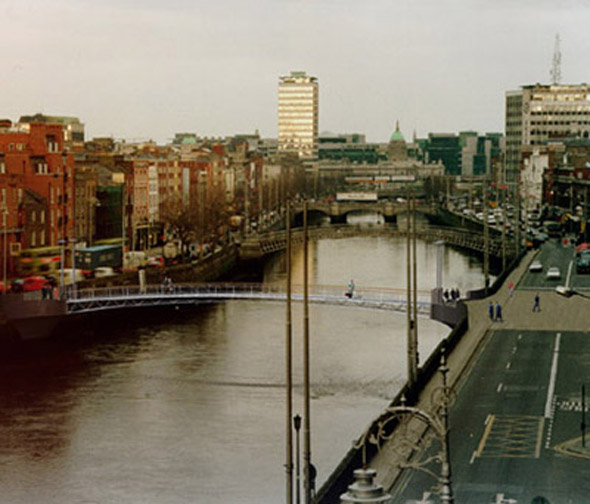 The bridge arch has a gentle gradient of 1 in 20, to allow disabled and wheelchair access and like the Ha’penny Bridge, the arch reduces in section toward the centre span. At the centre span over the river the clearance at high tide is appoximately 2 metres, which is higher than exsiting clearances at the Talbot, Butt, Grattan and O’Connell Bridges. The truss is an asymmetrical parabolic arch, which curves gently inwards in plan from each side of the bridge, and also from the abutments to its centre point. Short ramps on the lower north bank and a dropped pavement on the south bank allow the bridge to accommodate different quay heights while maintaining a balanced composition. The sensuous curves of the abutments respond to the movement of people on and off the bridge and to the flow of the river below. The stone clad concrete shells of the abutments are shaped to encourage the smooth flow of water around them at all tide levels thereby eliminating the risk of floating debris becoming entangled in the bridge structure. From the quay wall, the pavement sweeps out over the river, opening up the bridge in width at each end. This will relieve pressure at the busiest points and provide a place to gather and wait before crossing the adjoining busy roads. 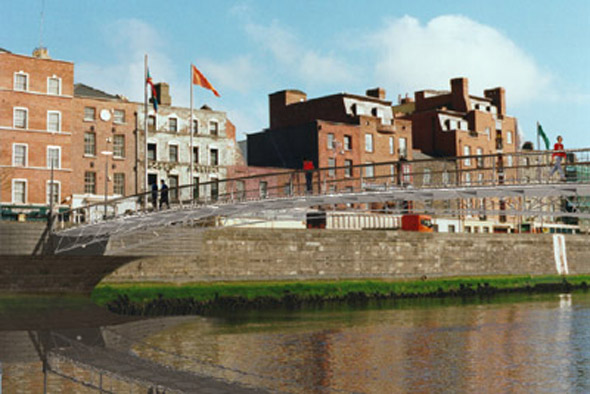 The shallow curves of the bridge are a highly efficient structural solution, describing the distribution of forces throughout the arched truss portal frame. the haunches of the portal frame are contained within concrete shell abutments which are faced with Wicklow granite and appear as a natural continuation oif the long uniterrupted run of the existing quay walls. Acting as spreadwaters, which are essential to any bridge emerging from a river, the abutments belly out from the quay wall. They are largely hidden at high tide, with only the shallow arched truss appearing above the water line, while at low tide, the more steeply cruved abutments are revealed to reveal a new bridge with the profile of a three centred arch.

The sense of lightness and transparency found in the bridge truss is echoed in the balustrade of the deck and in the abutment railings. The parapet of the abutments follow the precedent of the existing quay wall, by stepping down the granite stonework in semi-circular sweeps to allow views through to the river and the new bridge.

The slotted aluminium deck is supported off a series of secondary ribs running between the cross members. These are integral with the top booms of the truss and continue upwards to provide supports for the balustrade and bronze-clad leaning rail. Concealed lighting makes the footbridge a place of safety as well as an object of beauty at night. Side-emitting fibre optic lights run within the leaning rails, along the sides of the deck and in a broken line along the centre of the deck itself.