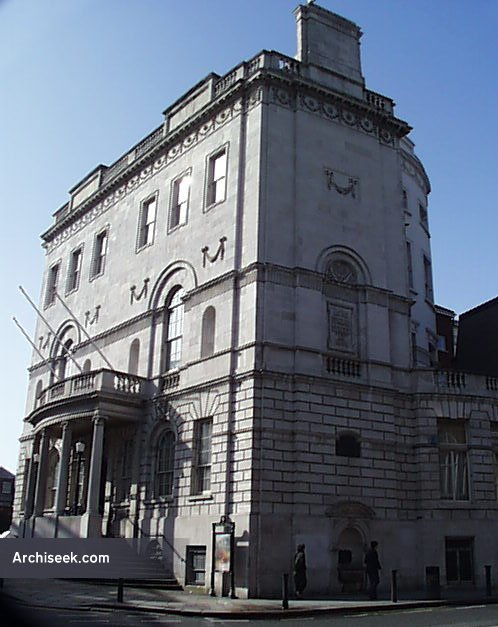 Designed by the architect Thomas Ivory in 1781, the former Newcomen Bank is now in use as a Rates office. The original building was half the size of the current structure – Ivory’s original design been mirrored and a new portico added to link the two halves together. A fine structure in Portland stone, the building is sited next to the City Hall.

The history of the bank is a complex one. In 1722 William Gleadowe married into the Newcomen family of Carriglass in Co. Longford and assumed their name. In 1781 he was knighted and elected to the Irish Parliament. He voted in favour of the Act of Union and his wife was rewarded with a peerage as thanks – an event that had many verses and songs (none complimentary) written about the family. In 1807 on his death, Thomas Viscount Newcomen inherited his mother’s title and the Bank. The Bank closed in 1825 after a series of banking failures in the city during the 1820s. After the Bank’s failure and his family’s ruination, Newcomen shot himself in his office – he was forty-eight. After his death the title became extinct.