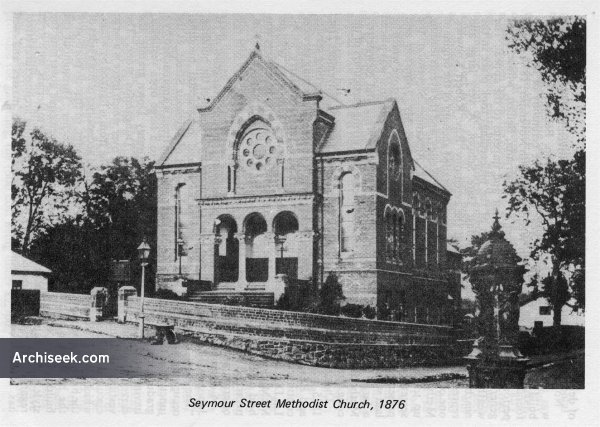 The present Seymour Street Church building was built and opened in 1875. Shortly afterwards a manse was built adjacent ground with Seymour Street National School, under Methodist control, openig in July 1886. It proved too small and it was replaced in 1908 by the William Foote Memorial School. The school continued to operate until 1966 when it was replaced by the Forthill Primary School. The William Foote School building was handed back to the Church, and used for many years before it was demolished in 1999.

“The foundation-stone of a new Wesleyan church and school has been laid at Lisburn by Philip Johnston, Esq., J.P. The site (which is the free gift of Sir Richard Wallace) is one of the best in the town—at the foot of Seymour-street, at tbe corner between the Belfast and Hilden-roads. Ample space will be afforded for two manses for the ministers.

The church (60 ft. by 36 ft.) is intended to seat 430 persons. For the present an end gallery only will be provided, but provision will be made for side galleries, should they be required hereafter. The slope of the site from the Belfast-road to Hildenroad has been taken advantage of, and a schoolroom has been provided below the church. The church will be entered off the Belfastroad by a rising path and flight of steps, with an open vestibule, having detached columns of County Down granite, and the schoolroom will be entered off the Hilden-road.

The difierence of level between the school and the church floors will be about fourteen feet, and both floors will be above the level of the respective roads from which they are approached, so that anything like a sunken floor will be entirely avoided ; and even the school-room will be open, well lighted, and properly ventilated. The style of the building may be considered a modification of continental Gothic. No special style will be strictly followed, the principle governing the design being an appropriate employment of inexpensive materials, with due regard to fitness of purpose together with the requirements and comfort of the congregation. The entire building will be faced with Belfast brick, and will have dressings of Dungannon sandstone, relieved by a few columns, carved caps, and enriched cornice on the front. A large circular stone window will bo provided in the front gable, and a similar light in each of the gables of the side wings. The church will be well lighted, comfortably heated, and thoroughly ventilated. Committee, vestry, and caretakers’ rooms will be provided at the rere of the church, and will be entered off the main road. The church and schools will be erected in accordance with the designs, and under the superintendence of Mr. Wm. Gray, A.R.I.A.I., architect, Belfast. The builders are Messrs. Thompson, of Ballymacarrett, Belfast. The cost will, be 4,000.” The Irish Builder, November 15 1874