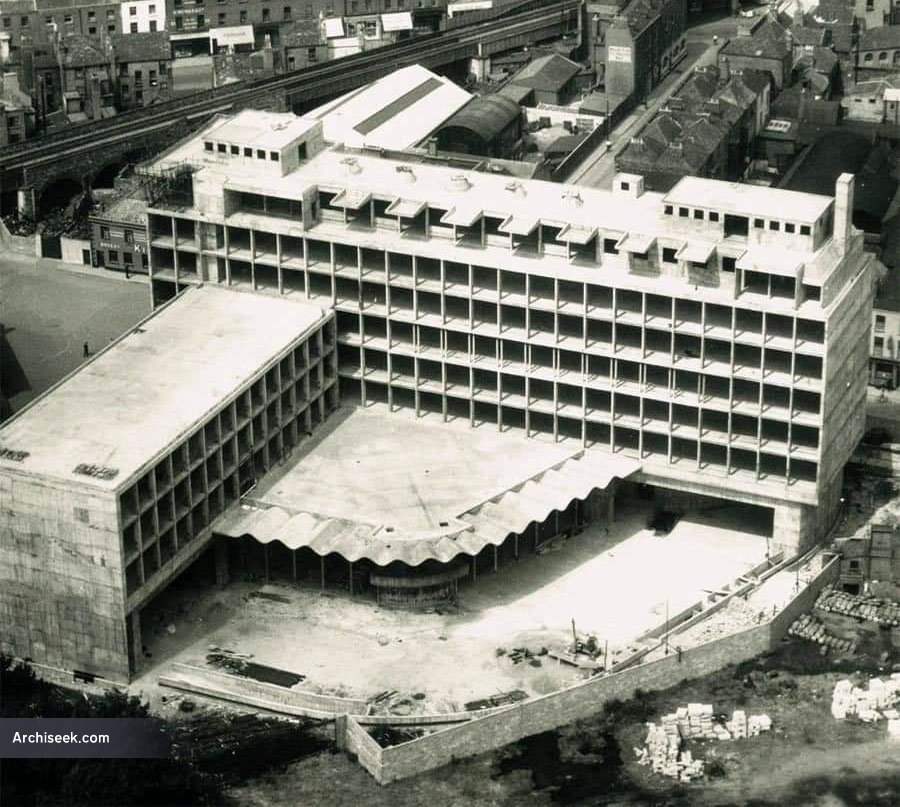 Sean Mulcahy was an engineer who worked with Jorgen Varming on Busaras and was later partner in Varming Mulcahy. Text of an interview from 24 April 1996.

I first worked for Jorgen Varming in early 1948. I was sent immediately to Copenhagen to work with an electrical firm there. I returned to Dublin in June 1949 to take over the electrical work on the offices. I think Nicholas Wallace was responsible for the bus station itself, as we had no role in the bus station. Mechanically the building was one of the few building in Ireland partially air conditioned. We could add humidity to the air through mechanical filtration but there was no cooling. It was thought that the windows could be opened in the summer to augment the air conditioning. They were to big however and susceptible to storms. So it was never great and we added cooling in the building about ten or twelve years ago. the fire installations were advanced for their time also with sprinklers systems.

Varming shared offices with Michael Scott and Ove Arup for many years. There was a good rapport between the practices that has really continued to this day. Arups do most of Scott Tallon Walker’s structural work and we do most of the services. Nowadays architects do not have much of the same influence in choosing the consultants anymore. It was a good office to work in, very friendly.

Scott’s firm were always very demanding architects, pressing things to the limits. they were very, very interested in the appearance of their buildings. This made it hard to accommodate the services. Nevertheless they did provide good buildings, but sometimes the money was not there to improve the environmental conditions. their styles of architecture meant that their buildings were prone to heat and humidity.

Michael Scott, himself, was always energetic and friendly to talk to. He was always interested in new developments but did not always understand them. He was not very scientific, with more of an artistic view of architecture rather than a scientific view. He could accept advice but not too much. Advice would never be allowed to influence his architecture. He got on very well with Arup and Varming. Arup was very responsive to architecture as was Varming, whose father was an architect. Varming was great supporter of architects. In those days there was a strong feeling among architects that engineers were a conservative and dull lot. But Scott’s team found Varming and Arup rather different. It is better today, but architects are still rather reluctant to get to know basic physics.

Michael Scott had the view that working for him was a privilege and I cannot imagine that the practice ever made much money. They were always redesigning things again and again. They had a very extravagant design process which is turn made our stuff expensive as we had to redesign our services to suit. A lot of the changes on Busáras would possibly have come from Scott himself. At McCairns Garage, we had lit the petrol pumps by indirect lighting off the canopy. However Patrick Scott decided that this should be painted blue so it didn’t work. That was the kind of thing that happened with Scott’s office.

I don’t know much about Dan O’Donovan. He was a great thorn in Michael’s flesh. Scott had a great relationship with the previous client A.P. Reynolds who let him get on with the job. It was a different scene when O’Donovan started, he wanted a great deal more information. Their relationship was not cool, though sometimes it was, but it could be very hot at times also. I did not have much contact with him as we were very much Scott’s engineers and were paid through him.

Busáras was a very important building at that time. It was a bit like the Trade Unions building in London, though it was finished a bit earlier. It was a rather similar scale, I cant remember the name of the architect. Scott’s design was pure Corbusier. Later with Robin Walker, it became more Mies van der Rohe. Ronnie Tallon was like that also.

There was a great social life to working in the building. Raymond McGrath’s wife Mary and Birgit Varming set up a Le Klint lampshade business in the basement – folded paper lampshades. This was a very amusing spot. Mary was very amusing – she was a Texan. That was one of the social highlights of 19 Merrion Square. Architects in the 1950s and 60s really had good parties. That seems to have died out in the last twenty years.

An amazing amount of architects passed through Scott’s office in those years; Peter Doyle, Sean Rothery, Pat Hickey, Kevin Roche. None of them could afford to stay long in the firm, as it was not easy to get a raise in salary. But anyone who worked there greatly enjoyed it. There was great respect especially for Robin Walker who was mentor to many of them.

There was a number of Danish architects working in the office for a time. I don’t know whether any of them worked on the bus station. Erhardt Lorenz who worked on McCairns Garage at Santry was working on a scheme for Amiens Street Station, I think. He later designed Arup’s London home. He also worked in Rhodesia and Robin Walker worked with him for many years there. Theses architects were involved with Scott through Varming rather than Arup who was based in London at this stage.

Varming and Arup done a lot of work together like Coventry Cathedral by Basil Spence. When Scott got the bus station project, he was convinced that Irish engineering was not up to his requirements. He was recommended Oscar Faber for both structure and services. Then he was introduced to Ove Arup and was very impressed. I don’t think Arup was yet in private practice, as he was working for a London firm. His first official practice was here in Dublin. He recommended Varming to Scott. By the mid 50s Varming had left Dublin and I was sole partner in Varming Mulcahy. I later approached him in Denmark and together we set up in London on Arups recommendations. He passed all his big clients on to us. Robert Matthew who was chief architect at London County Council became Professor at the University in Edinburgh. He encouraged us to set up in Edinburgh and we took Arup with us.