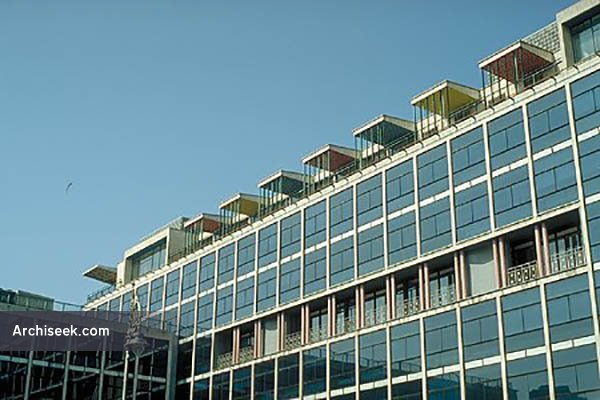 MacEoin joined Scott’s practice in 1945 and worked there for about three and a half years. Interviewed at his home, 12 September 1995.

Scott was a colourful character from the mid 30s onwards. He was in with the horse racing set, though he had little or no money – Hilton Edwards and the other actors of the time were friends. When he married, it was believed that the wife had a small dowry, £5,000 or thereabouts which was probably eventually used to build Geragh at Sandycove. It was thought at the time that he married well. He basically scraped through into architecture, in that he barely passed the special examinations of the RIAI.

A story believed to be true is told about a dinner party in Westmeath at which Scott was present. The More O’Farrells were the land agents for the Sanderson estate and there was a dispute about land rents. So the IRA came to the door during the dinner party with the aim of scaring them perhaps to tar and feather the father. There were eleven or twelve present at the party – and when the IRA came to the door, the eldest son and father went for shotguns hanging on the wall. The son was fatally wounded and Scott was found cowering under the table. [Never to be forgiven.]

AP Reynolds – he was from Meath – was an accountant who had built up a small but successful bus company – which was amalgamated to form the Dublin United Tramways which them became part of CIE. He was appointed head of CIE by Sean Lemass who was a racing buddy. Scott was friends with Reynolds through racing also – Reynolds was an owner, there is a possibility that Scott was a part share owner in one of his horses. Scott never had much money so he could not own one solely. Reynolds was a moderniser except that he was more concerned with buildings than services.

He commissioned railway workshops at Inchicore that were never built – This commission went to Buckley and O’Gorman – recommended by Scott. Donnybrook Bus garage was designed by Jim or James Brennan – again recommended by Scott – Scott’s practice got the credit however. Scott at this time was very generous with commissions, spreading them around.

The site at Store Street contained a L shaped four storey building that may have been a bonding store. When Scott got the commission his office was still in Clare Street. His offices were on the first floor with a drawing office in the front drawing room, and Scott’s private office in the rear drawing room, there were other offices on the ground floor.

Scott was also on the Arts Council, whose head was Fr. O’Sullivan a Jesuit – they were both in each others pockets. O’Sullivan was a drinking buddy of Lemass.

In the offices at the time were Barry Quinlan, Barney and Hilary Heron [a sculptor], Bill O’Dwyer (responsible for the cinema’s). Scott was in with Louis Elliman who owned the Savoy Group and the Gaiety. Barney Heron was very interested in timber and indeed was responsible for designing very sophisticated pre-fabs. Scott always designed in what style was fashionable at the time.

Scott also did a lot of work for D.E Williams of Tullamore Dew who lived at The Abbey in Tullamore. He was also into horses.

Busáras was first conceived in 1945 and the initial doodles were completely different from the finished design. This was carried out by Barry Quinlan. Nothing really happened until three ex students Patrick Scott, Wilfrid Cantwell and Robin Walker joined the practice from UCD. Cantwell muscled his way into the Busáras job after a couple of months by constantly harassing whoever was working on it, by leaning over the shoulders of the person and annoying them. He then took over the running of the job until he left three years later. He really designed the building but was a great fan of Le Corbusier and the Modulor – in that he had a copy of the book beside him at all times and was constantly measuring and copying out of it – the building is designed completely in line with the Modulor. [However The Modulor was not published at this stage though Le Corbusiers states that he was using the modulor since before 1948 and that “other technicians, too have applied the MODULOR in noteworthy ways” (Le Corbusier, 1951, p. 5). Although it is possible that Robin Walker having worked for Le Corbusier brought back details of the Modulor theory from France to the practice where it was applied by Cantwell, it was the influence of Le Corbusiers earlier books such as Towards a New Architecture (1927) and publication of his early work that influenced the building’s appearance.] He was not responsible for the pavilion however. Robin Walker may have been responsible for the skyline and the pavilion.

The design that was built was design no. 12. At on stage he changed his mind and Design No. 13 had one block of 8 floors. The structure was complete by the time Cantwell left Scott’s Office. He later was on the Arbitration Panel of the RIAI and was a cantankerous bastard. There was a saving of about £10,000 in using Portland stone.