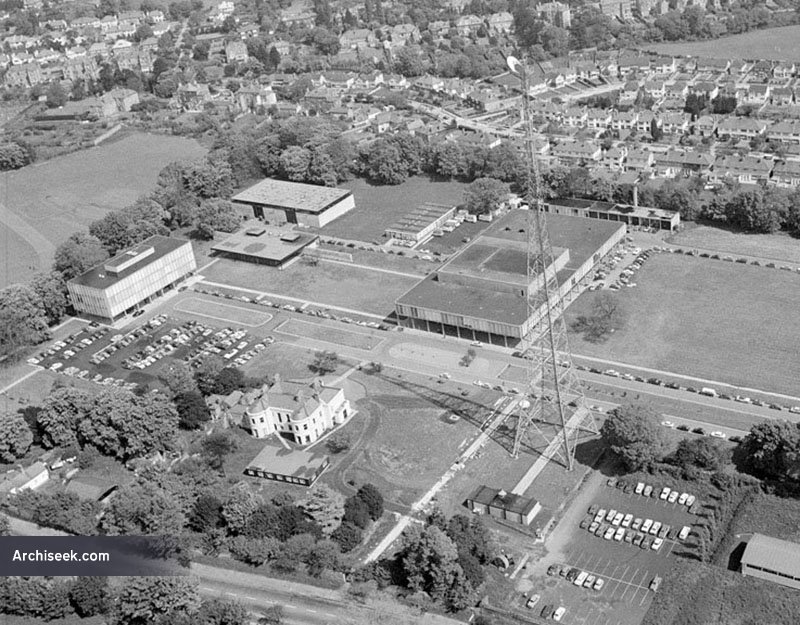 Masterplan by Ronnie Tallon of Michael Scott & Partners, later Scott Tallon Walker, for a new broadcasting campus at Donnybrook. Up to this point, RTE had broadcast from the GPO on O’Connell Street. Tallon produced several plans as the site developed, from the original concept in 1960 to a revised plan of 1963.

“The original master-plan idea – with Television expanding to one side and Radio planned to grow on the opposite side – had to be abandoned, and in 1963 a new master plan was prepared as a campus layout to allow different disciplines expand independently and at different rates. The original Television building was allowed to expand as planned, but separate buildings were planned for Administration, Scene-dock manufacturing, Restaurant and Radio.” Scott Tallon Walker

While parts of the plan were constructed, some were not – most obviously the three similar blocks. “A further master plan was made in 1974 to include two additional office-type buildings for producers and programmers. These were designed as identical buildings to the existing Administration building, with all three office-type buildings linked at lower-ground floor by a Library and Archives to house broadcast material originated at the studios….. The placing of this building between the original Television building and the Administration building meant that the proposed series of three identical office buildings linked with the Library and Archives could not be realised. ”

Later developments were added to the site without reference to the original intent.