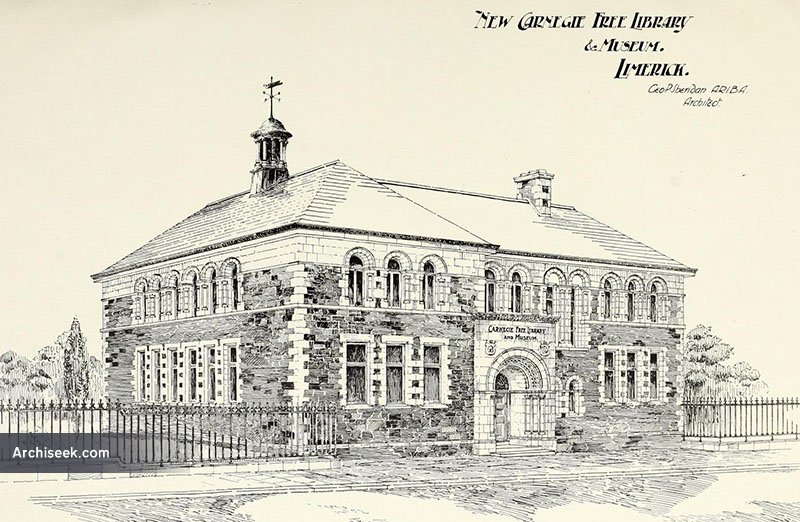 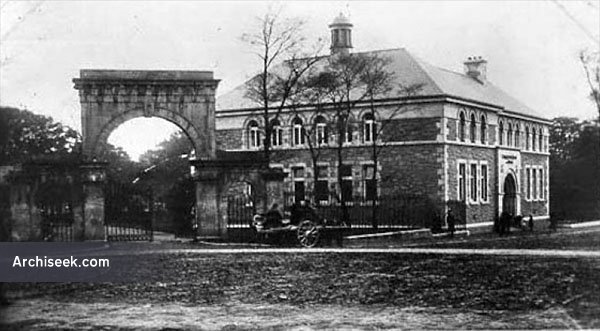 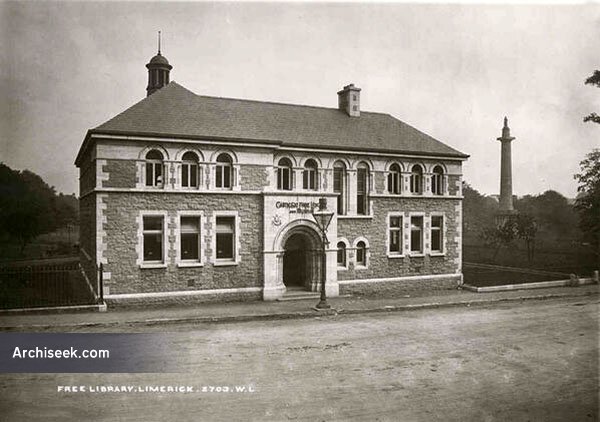 Library funded by donation from Andrew Carnegie, and constructed after an architectural competition. Sheridan’s design was actually placed second by the assessor G.C. Ashlin. The foundation stone was laid by Carnegie in October 1903 and construction completed by 1908.

From The Irish Builder: “The new Carnegie Free Library and Museum at Limerick, the foundation stone of which was laid by Mr. Andrew Carnegie some time ago, is now almost completed. The building is carried out in local limestone, the walling in hammer-dressed uncoursed rubble, with dressings of lighter coloured stone fine chiselled.

The porch is built throughout in dressed stone, the cornice being carved with interlacing work, and the entrance door is enclosed by semicircular arches in three orders springing from engaged columns, the caps of which are covered with interlacing ornament and conventional animals, inspired by ancient Irish work.

The roof is covered throughout with Killaloe slates, and is surmounted with all copper ventilating flecates.

The work has been carried out from the designs and under the superintendance of Mr. Geo. P. Sheridan, A.R.I.B.A., 25 Suffolk-street, Dublin. The contractor for the building is Mr. James P. Pile, of Lower Erne-street, Dublin, who has carried out the work in a very satisfactory manner.

The contract for the heating is in the hands of Messrs. Maguire and Gatchell, of Daw son-street, Dublin, the electric lighting is being carried out by Messrs. Wm. Coates and Son, of Belfast and Dublin, and the furniture and fittings contract has been placed with Messrs. Alesbury Bros., of Edenderry, King’s County.

The total cost of the work, including heating, furnishing, lighting, etc., is covered by the amount of Mr. Carnegie’s gift of £7,000.”

The Limerick City Collection of Art was established in 1936, it has since taken over the Carnegie building and expanded into a purpose-built extension.