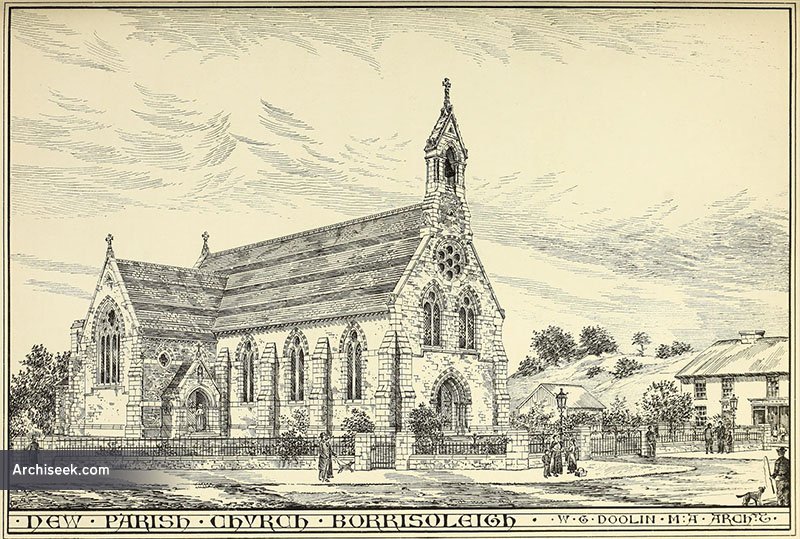 The interior of this small parish church by Doolin has many surviving decorative features in the sanctuary area. It has a richly-decorated interior with gilded work to chancel and apse with marble reredos and marble columns to transepts.

“This new church, an illustration of which we publish to-day, occupies a commanding site at right angles to the main street of the town, with the transept and sacristy facing the county road to Nenagh ; it is in the Gothic style of the Early Pointed period, and com- prises a nave, transepts, and octagonal apse ; the total length being 107 ft. internally; width across nave, 28 ft.; width across transepts, 72 ft. Externally the walls are faced with masonry of blue limestone, the dressings to doors, windows, &c., being of a beautifu cream-coloured stone, brought from the Drumbane Quarries, about twelve miles distant.

The west front, which faces the main street, has a bold deeply-recessed doorway, with two orders of arches and clustered columns ; and the gable is surmounted by a cut-stone belfry rising to 80 ft. from the ground-line. The nave is lighted by coupled lancet windows with plate tracery heads ; the transepts, which will be given over to the poorer portion of the population, are entered by separate porches ; the nave will be entirely seated. The roofs are of open timber-work, panelled with pitch pine and covered with Victoria slates. Open arcades of cut-stone, supported by shafts of polished Newry granite, separate the nave from the transepts. Generally, the design is simple even to severity, the architect evidently relying on the effect of studied proportions and contrast in colour rather than elaboration of external detail. The total cost of the works, which are being vigorously carried out by the local builder, Mr. Thomas Williams, of Borrisoleigh, will be about £5,000. The design has been furnished by Mr. W. G. Doolin, M.A., architect, of Dublin, who is at present engaged in numerous other ecclesiastical works in the district.

The foundation-stone was laid on Sunday, 17th ult., by his Grace the Most Rev. Dr. Croke, Archbishop of Cashel, who, as also the Rev. E. Kenrick, P.P., opened the subscription list by placing £100 each on the foundation-stone. The ceremony was attended by a vast concourse of the clergy and laity of the diocese.At the conclusion of the ceremony, a handsome silver trowel, bearing the following inscription, was presented to his Grace the Archbishop by the architect : — “ a.m.d.g. To his Grace the Most Rev. T. W. Croke, Lord Archbishop of Cashel and Emly, Primate of Munster. Foundation-stone of the Parish Church of Borrisoleigh. Laid 17th July, 1892. Rev. Edmund Kenrick, P.P. W. G. Doolin, M.A., architect ; Thomas Williams, builder.” The Irish Builder, August 1 1892.