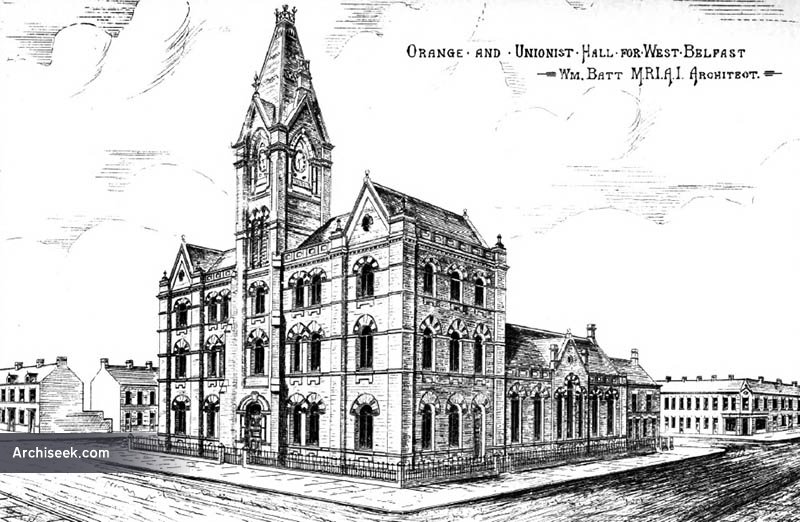 An unbuilt design for an Orange Lodge in West Belfast. A more modest building was opened in 1898. Described in The Irish Builder: “This building (which forms the subject of our illustration) will occupy a commanding site, 93 ft. in front, and extend back 120 ft. at rear, between two streets, at the upper end of Shankhill-road. It is divided into three sections : the main or front one, three storeys high, contains the lodge-rooms and library; it is entered through a central porch, 10 ft. square, and large folding sash doors, into hall and corridor at rear; off which, at each side, there is a lodgeroom — one 32 ft. x 17 ft., and the other 25 ft. x 17ft., lighted from the front. From the inner hall, by a wide and easy staircase, the first floor is reached, and has similar accommodation to ground floor, including a large room fitted up with presses. Over these apartments, on the second floor, there will be : the belfry, 10 ft. x 10 ft.; lodge-room, 25 ft. x 17 ft. ; and minor hall, 32 ft. x 26 ft. and 15ft. high, having roof supported by framed and wrought principals. Proper ante-rooms and sanitary arrangements are provided on each floor. The large hall, or second section, is placed behind in centre, having its side to. the upper street ; it will be a splendid room, 60 ft. long, 36 ft. wide, and about 25 ft. high, with a raised platform at one end, and horse-shoe balcony at the other, and will hold about 600 persons. The walls will be broken by pilasters, and the roof half open, the exposed timber wrought and moulded, with pierced spandrils springing from neat corbels, and have abundance of light from large windows.

Adjacent to the hall, off side corridor, the ladies’ and gentlemen’s retiring and storerooms are placed, and also caretaker’s apartments — the latter within view and easy reach of entrances. Besides the large front entrance, others are also provided from each street, and the building is so planned that the front section is complete in itself, or the large hall can be used in connection with it when required, as independent doors are provided, and a staircase giving access to the balcony. The third or rear section consists of four dwelling-houses, the rents from which would greatly reduce the ground rent of the whole block. The ceilings are lofty, and the building will be well ventilated. Between retiring-rooms, and near side street, a large open space, 60 ft. by 25 ft., is placed, which will be found very useful, and an open area surrounds the building. The style of architecture adopted is Venetian Gothic of a simple and inexpensive character. The elevations will be brickwork, various colour being introduced, and they are well broken up by pilasters and gables, the chief feature being the central tower, 90 ft. high, to contain the public clock and peal of bells. The plans have been approved of by the committee, and are very well arranged for the proper working of the business of the Institution and for the delivering of public lectures, and were prepared by Mr. William Batt, M.R.I.A.I., architect, of Garfield Chambers, Royal avenue; and the building when complete, including the clock and peal of bells, will cost between £4,000 and £5,000.”