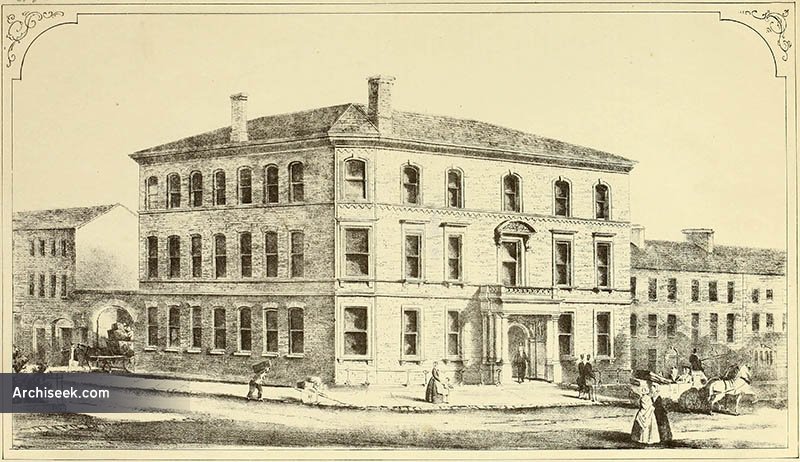 Originally built as a Linen Warehouse for Moore and Weinberg by Lanyon, Lynn and Lanyon in 1864. Converted just thirty years later into the famous Linen Hall Library by Young & Mackenzie.

“The warehouse, an illustration of which appears in this number, is selected as a specimen—scarcely even an average one—of the class of buildings which are springing up in the town of Belfast. In some cases, where whole streets are composed of such edifices, the effect to a stranger’s eye is somewhat striking, and eminently suggestive of commercial respectability. Not a few of these buildings are not wanting in suitable architectural character, and the admirable ornamental and structural details are well worthy of study. We hope to return at a future period to the illustration of some of the more elaborate ones. This one suffers under certain disadvantages arising from an awkwardly crooked site, but is nevertheless a substantial-looking, respectable building. The arrangement of the entrance doorway, decorated in a novel manner with festoons of linen, is noteworthy.

The facing of the building is Scotch fire brick, with Scrabo stone dressings to the windows and doors. It is the property of Messrs. Moore and Weinberg, and the architects, we believe, were Messrs. Lanyon, Lynn and Lanyon.” The Dublin Builder, November 15 1864.