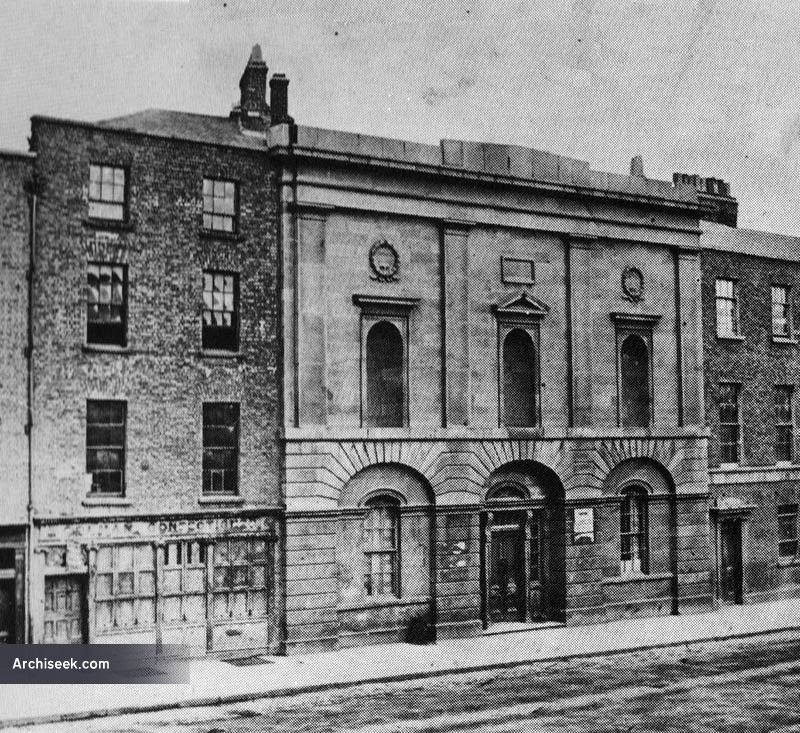 The Royal Irish Institution for encouraging the Fine Arts in Ireland, was founded in 1813. Its objects were the “stimulating native talent by furnishing models to assist the labours of Irish artists and by rewarding the authors of works of superior merit.” For these purposes collections of the works of the old masters were to be got together and exhibited. Demolished in 1866 for construction of the headquarters of the Provincial Bank

Described in The Dublin Penny Journal, December 22, 1832: “The Royal Irish Institution, for the encouragement and promotion of the Fine Arts in Ireland,” was founded on the 4th of June, 1813, and their Gallery for the public exhibition of the works of the Old Masters, was first opened in the year 1829. It is an unpretending, but pleasing architectural structure, creditable to the taste of its designer, Mr. Frederick Darley, and consists of two stories–the lower, ornamented with rusticated masonry, pierced by two circular headed windows and an entrance archway–the upper, decorated with four plain pilasters, upholding a continued entablature : the spaces intermediate between the pilasters, are occupied by niches, decorated by architraves and dressings. The interior consists of an entrance hall, board-room, and keepers’ apartments, on the basement story, and one octagonal gallery, judiciously lighted by a spacious lantern, on the story above. This gallery is forty feet long by thirty feet wide, and nineteen feet high to the cove.

The Institution is chiefly supported by the subscription of its members, aided by the receipts of the exhibitions, of which there has been eight since the foundation. That such exhibitions, by familiarizing the public eye with the finest specimens of art of preceding times which the country possesses, are equally gratifying and useful, cannot admit of a doubt; it is therefore greatly to be regretted, that latterly they do not receive the attention from the public they so well deserve.”