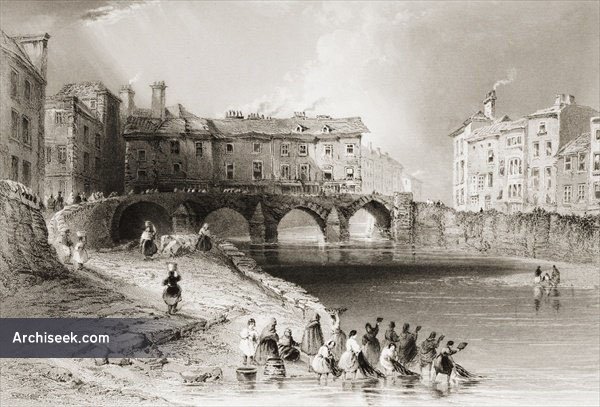 Medieval bridge with housing, demolished in the 1820s. During the demolition a significant archaeological object was found in the foundations of the old bridge – a brass Square of Freemasonry symbolism was found in the foundations with an inscription dating from 1507. Also inscribed on the square is the text “I will strive to live with love and care upon the level, by the square.”

According to a Masonic publication, The Builder, “Brother James Pain, architect and engineer, of this city, contracted in the year 1830, to re-build Baal’s Bridge on taking down the old one, the period of erection of which is unknown though noticed in the records in 1558 at the proclamation of Queen Elizabeth. Bro Pain discovered under the foundation stone at the Englishtown side, this old brass plate much eaten away.”

The date of the erection of the old bridge is not known, although it seems that there has been a bridge at this location since the year 1174 at least, when the city came into English hands. The deposit might have been made during some repairs to the abutments of the bridge, or the bridge was constructed around the early 16th century.