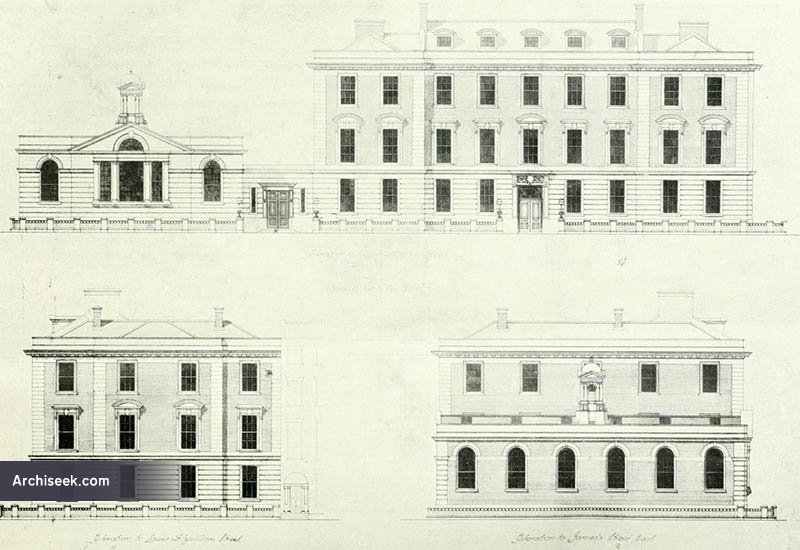 A series of illustrations for the National University’s proposed Headquarters at the corner of Merrion Square, Upper Mount Street and Fitzwilliam Street. Designed to contain Administrative Offices and Senate Rooms, the building was never proceeded with. The city architect C.J. McCarthy was the assessor of the competition. Almost fifty years later, much of the site and neighbouring buildings were cleared for the construction of the ESB Headquarters by Stephenson Gibney. 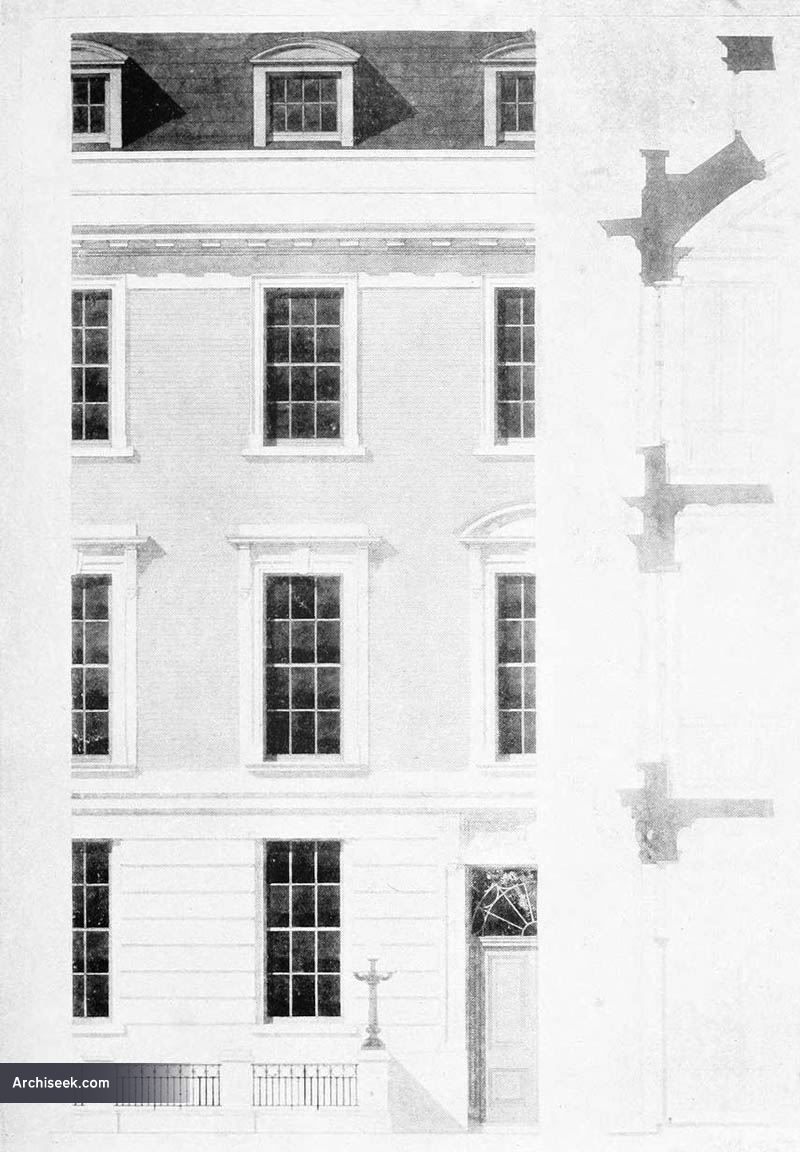 “The assessors’s decision in the architectural competition for the new buildings of the National University of Ireland has at length been announced. The designs Messrs. W.G. Clayton and Keatinge, architects, Dublin, have been placed first; Messrs. O’Callaghan and Webb, second; and Mr. E. Bradbury, third. There were about nine competitors. The designs are on view at the National University Offices, Merrion Square, Dublin. One of the designs, according to the Irish Builder, that of Messrs. Fennell and Clarke, came from Belfast, and one, Mr. Arthur Hill’s , from Cork, the others are by Dublin architects.” The Building News, December 12 1917. 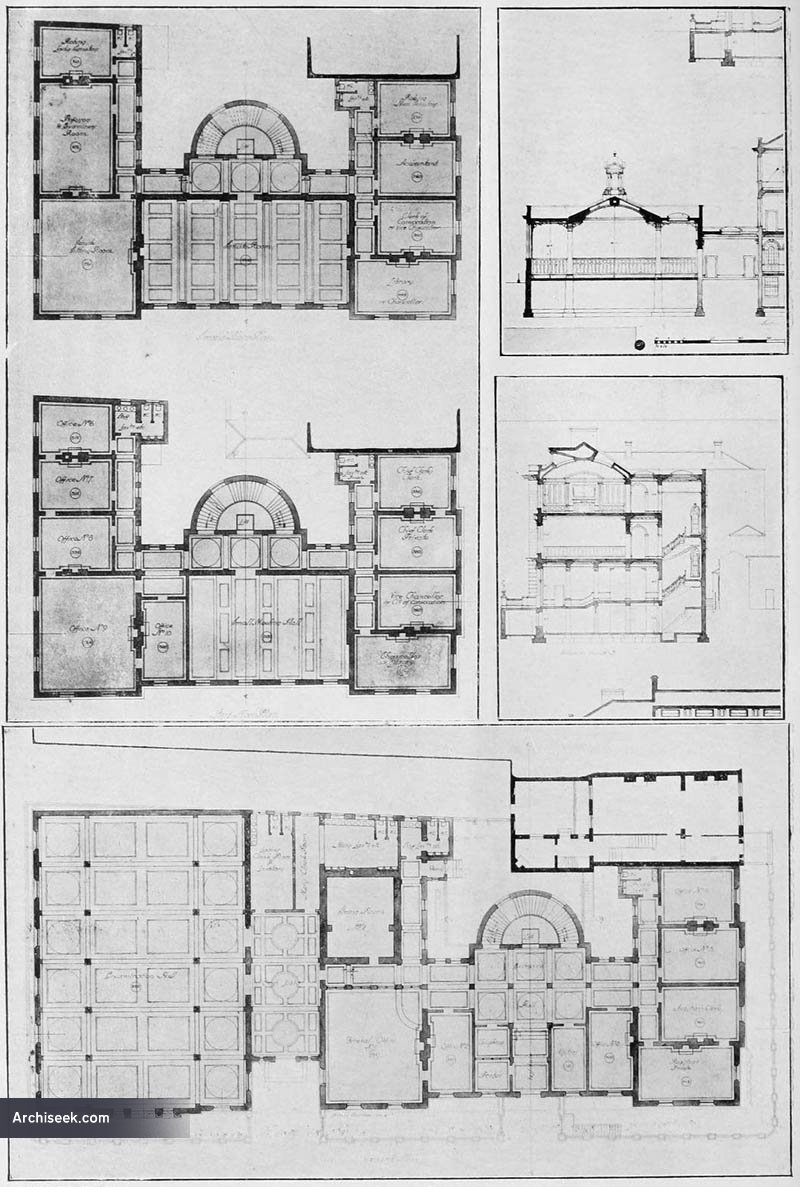 “Premiums of £100 and £50 were given respectively to the authors of the two premiated schemes placed second and third, and the architects of the chosen design will carry out the buildings. The amount to be expended was approximately fixed at £19,000 exclusive of furniture and fittings. The intention is to employ Irish materials, and the style of architecture had very properly to be in character with the surroundings and also treated without needless elaboration. This stipulation has been admirably realised in a dignified and unpretentious manner, as will be seen from the reproductions which we publish today of the elevations and plans by Messrs. W.G. Clayton and Sedgwick Keatinge, who have managed successfully to follow the Classic tradition so distinctive of the best historic buildings in Dublin. A suitable recognition, too, of the purpose for which this central University addition to the city institutions is shortly to be erected has been ensured in a very simple way. Mount Charles stone and County Dublin granite will be used for the facades.

The accommodation provides a senate room with a floor area of 1,800 sq.feet; a large examination hall, 5,000 sq.feet floor space, suitably provided for big meetings and having lavatories and cloakrooms en suite. A smaller hall of about 1,400 sq.feet is contrived. The entrance hall also had to be made a distinctive feature of the building, and attached to it a porter’s lodge, telephone place, and a room for visitors. There are, of course, sitting rooms for the Senate and their robing rooms including a special one for lady senators. The chancellor’s room is supplemented by another for the vice-chancellor, the professors’ and examiners’ rooms; added to which are the apartments to be occupied by the registrar, chief clerk and accountant, clerk to convocation, and ten separate offices for the staff. The reference library and rooms for a caretaker, as well as ten storage rooms, form part of the layout, with a goods entrance from James Street East. The plans at once show the ingenious disposition of these several departments to be house in this comparatively small and compact building which appears to be well lit in all respects. The successful architects decided to make their examination hall an entirely separate building, and besides thereby ensuring a direct light to every corridor and room, the advantage of isolation is made manifest, inasmuch as the hall may be used on occasion for public concerts as well as general meetings in the evenings of daytime.” The Building News, February 12 1918.

William G. Clayton was for almost fifteen years an assistant of W.H. Byrne & Son before starting his own practice. Sedgewick Keatinge had been previously employed by the Board of Works, and O’Callaghan and Webb. Both were widely travelled with Keatinge having worked in California. In 1919 due to fears of failing eyesight and the declining architecture market, Clayton gave up architecture and moved to the countryside where he farmed until in death in 1946. Keatinge went on to. become a partner in Donnelly Moore & Keatinge.