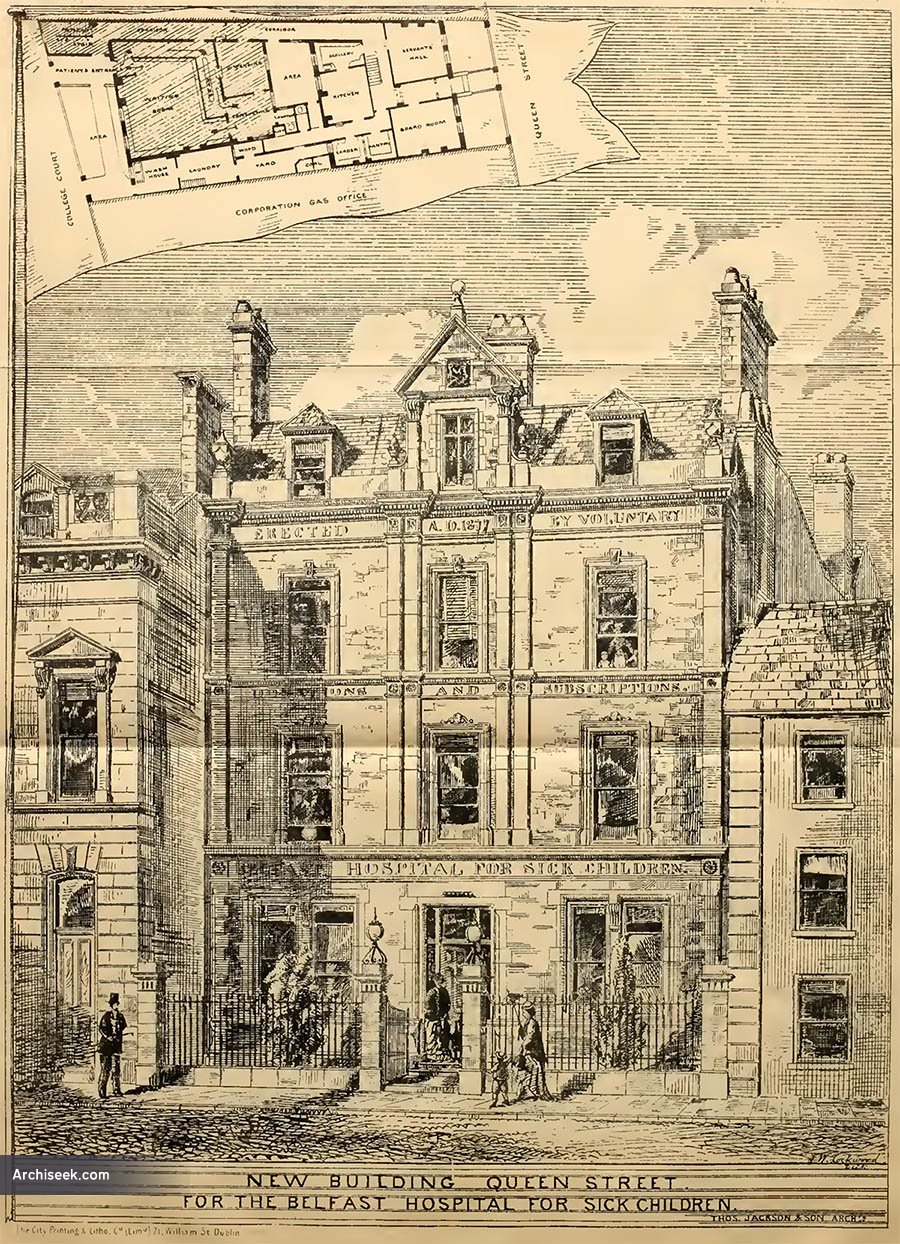 A three-storey building finished in Scrabo sandstone set back from the main building line of Queen Street. The Hospital moved to the Falls Road in the 1930s. The building was later used as a police station until the 1990s. This building still stands on Queen Street but in an increasingly derelict state.

“The Belfast Hospital for Sick Children, the new building for which forms the subject of our illustration in the present number, was opened in June, 1873, in King-street, in a house taken for the purpose, and has since met with so much success that the committee have determined on the erection of a building to suit their increasing requirements. A plot of ground has been selected in Queen-street, a locality which combines comparative quietness with proximity to that part of the town chiefly occupied by the poorer classes. The foundations have been commenced, and it is hoped the new building will be ready for use in a few months. Considerable difficulty has been met with in arranging the plan on so contracted a site, so as to secure the maximum of light and air, with the maximum also of accommodation for the inmates.

The hospital portion is arranged chiefly in the rere, so as to be removed from the noise of the street, the front building being devoted to administrative purposes, comprising board-room, servants’ hall, kitchen, storerooms, matron’s apartments, and bed-rooms for the officials. There are also several rooms which will be used either for a better class of patients, or for lady students, as the board may hereafter decide.

The hospital block, which is arranged to receive light on three sides (the wards themselves form two), has the extern department on the ground floor, entered from Collegecourt, and so arranged that the patients enter the waiting-room, pass into the consulting-room, and from thence to the dispensary and so out, without any interference with each other or the ordinary working of the establishment.

The in-patients’ wards occupy the first and second floors, and consist of two large wards to hold 18 beds each, nearly square on plan (the committee having wished to avoid as much as possible an hospital appearance, and to ensure cheerfulness), and two small wards for isolated or special cases. With the rooms previously mentioned there will be accommodation for 50 beds. Nurses’ kitchens and bathing and preparation rooms, &c, adjoin each ward—and operation room and mortuary are also provided. The laundry, wash-house, and drying-room form a low building in the rere, so as not to affect the admission of light and air to the wards, &c. In explanation it may be stated that the lighting of several of the rooms on the ground floor is much more perfect than can be shewn on the plan without the aid of sections, &c.” The Irish Builder, December 15 1877.