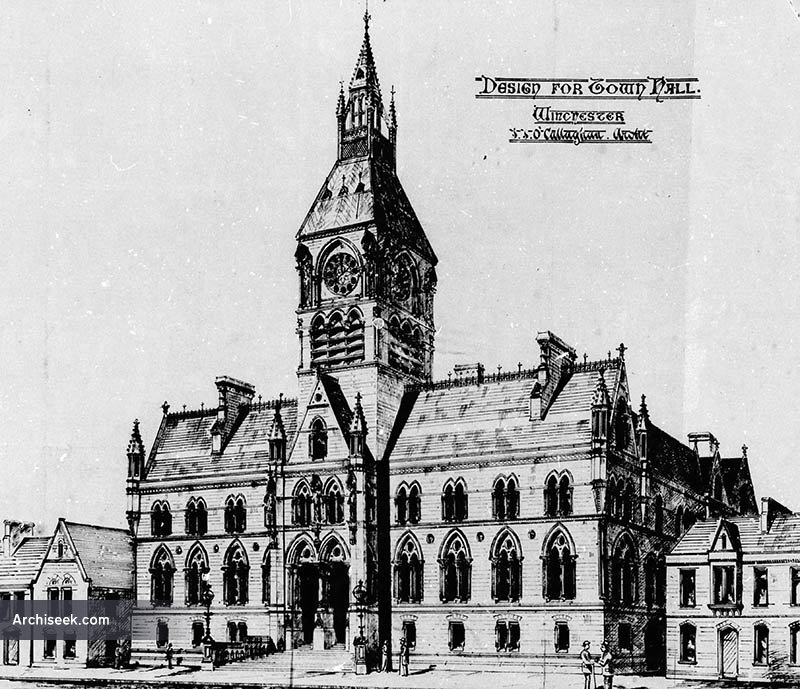 Unsuccessful entry for new Guildhall, or Town Hall, for Winchester by Dublin architect J.J. O’Callaghan. Design was one of six shortlisted.

“Amongst these six so retained was one under the motto ” Concentration,” (27) by Mr. J. J. O’Callaghan of this city, a perspective view of which forms the subject of our illustration in the present number. We deem it highly complimentary to our townsman to find that his design has been favourably noticed by our professional contemporaries in London. The Builder considers that it ” is a very ably and cleverly arranged plan, every bit of space being utilized.” The Building News remarks that “‘Concentration’ has a remarkably compact and well thought-out arrangement. Forming a rectangular block, there is perhaps less lost room in this plan than any others. The hall is located along the back, and is amply approached by entrances at the east and north sides, though rather indirectly. The only fault seems to us to be the number of exterior steps required to gain the principal apartments, though it must be remembered an excavated basement on the intended low site for this building would be very questionable ; probably the author had this in view. The conveniences of this plan appear to he more complete than any of the others. The proportions of hall and its roof are good, and the arrangement of the whole plan is, as we have said before, well considered, and fully bears out the motto adopted by its author. The external front of this design, which is in the Gothic style, has, perhaps, a somewhat commonplace appearance, but its defects in this respect, which are chiefly those of detail, are quite overbalanced by the merits of the plan and its general proportions. If the same amount of study had been bestowed upon the facade which the plan evinces, this would probably have been the most successful design of the whole collection.” In returning Mr. O’Callaghan his drawings, the Council expressed their thanks for the talent and skill displayed in his design, which led them to retain it as one of the six sets’specially meritorious.'” The Irish Builder, July 1 1871.