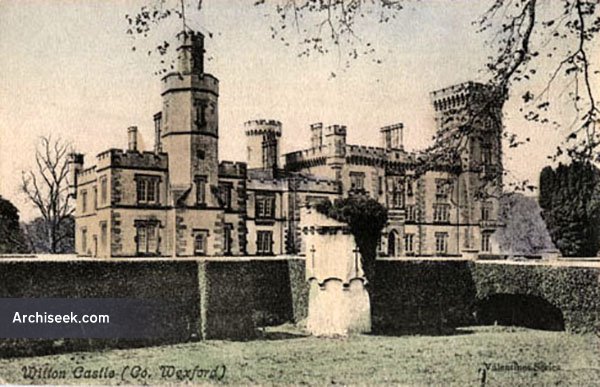 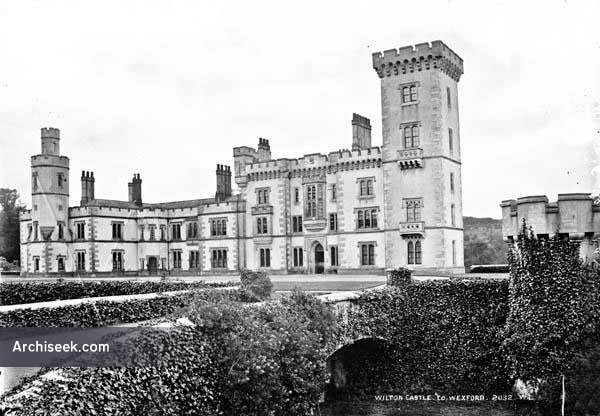 A late 17th century house was subsumed into a much larger and ornate building designed by Daniel Robertson of Kilkenny in 1836-38 as a spectacular castle. The Alcock family had it built on a moated platform surrounded by parapet walls and sham fortifications. Heavily battlemented and machicolated, the house consists of a three-storey main block and two-storey wing, all dominated by a tall square tower at one end and a tall polygonal tower and turret at the other. 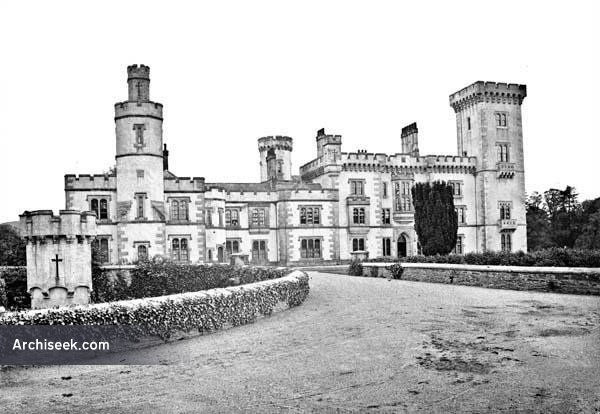 The Victorian house was burnt by arsonists during the Troubles in 1923, and a contemporary account in the Irish Times, 7 March 1923: ‘Wilton Castle, the residence of Captain P.C. Alcock, about three miles from Enniscorthy, was burned by armed men on Monday night. Nothing remains of the beautiful building but smoke-begrimed, roofless walls, broken windows, and a heap of smouldering debris. The Castle was occupied by a caretaker – Mr. James Stynes – the owner, with his wife and family, having gone to England about a year ago. Shortly after 9 o’clock on Monday night the caretaker was at the Steward’s residence…when he was approached by armed men, who demanded the keys to the Castle. When he asked why they wanted the keys, one of the armed men said: “We have come to burn the place. We are sorry”. The raiders told the caretaker that he could remove his personal belongings from the part of the Castle that he occupied, but they would not allow him to remove the furniture. Fearing that the Castle might be burned, however, Captain Alcock had removed the most valuable portion of his furniture some weeks ago, but a good many rooms were left furnished. When the caretaker had removed his property he was ordered back to the Steward’s house. Soon the noise of breaking glass was heard. It appears that the armed men broke all the windows on the ground floor, and having sprinkled the floors with petrol, set them alight. They did not hurry over their work of destruction, and they did not leave the Castle until near 12 o’clock, when the building was enveloped in flames. About thirty men took part in the raid. After the raiders left, the caretaker and Steward, with what help they could procure, tried to extinguish the flames, but their effort was hopeless”.

After the fire, the lands were redistributed by the Irish Lands Commission. The ruin, with its dramatic silhouette, is still a prominent landmark, and in 2009 the house was partially restored.