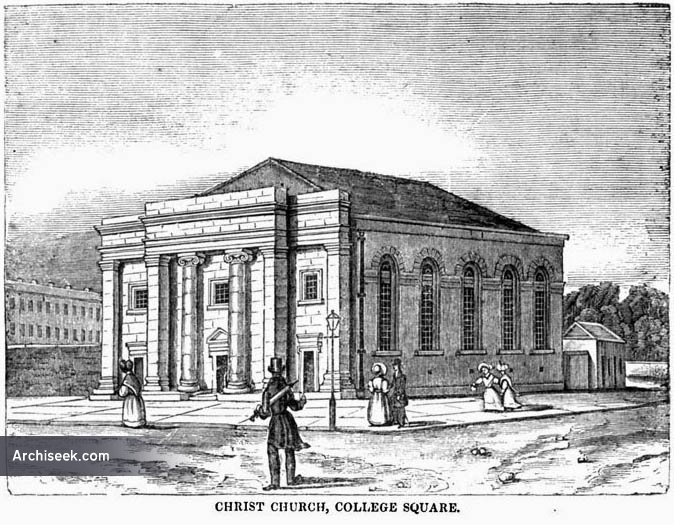 Designed to accommodate 1,650, consecrated 25 July 1833 and closed June 1993. After lying redundant for several years, it suffered severe fire damage in 1996, with just four walls and some charred roof trusses left standing. It has since been restored with an extra floor inserted, and is now a educational Centre of IT Excellence for the Royal Belfast Academical Institution.

Described in The Dublin Penny Journal, Views in Belfast (1833), as “It being found that a Church was much wanted for the poorer classes of Protestants, the present edifice was erected. The sum of £2000 was granted by the Board of First Fruits; and £3000 were raised by subscription to complete it. It is a plain edifice, with a cut stone front and colonnade of the Ionic order, surmounted with an entablature; the other parts are of brick, with windows in recesses, ornamented with circular architraves. The interior is laid out to give as much accommodation as possible: there are seats for one thousand persons on the ground floor; and there is a handsome gallery, which holds upwards of six hundred persons — it has been lately inclosed with an ornamental iron railing. It was opened in July, 1833. Near the Church a most commodious School-House has been erected, which was also completed out of the liberal subscriptions of the inhabitants.”