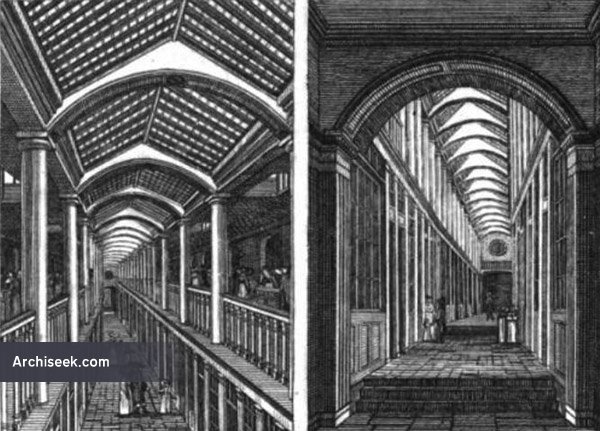 Destroyed by fire in 1838. Described as “a beautiful structure two storeys high. The under one being the Arcade contained 30 shops filled with all sorts of merchandize, to regulate which strict bye laws were made; the first floor was used as a Bazaar, and extended over the entire line of shops on both sides of the Arcade and being connected at each end, formed a Promenade much resorted to. It was laid out with a range of counters the whole length about 200 feet; the roof was supported by two ranges of Grecian Doric columns; and added to the noble effect of the building.”

“Communicating with the Promenade is a commodious suite of apartments comprising Ball, Supper, and Card Rooms. Adjoining these is an extensive gallery which was until lately occupied by the works of Irish artists in painting. architecture, sculpture. In another part of the building is the Sans Pareil Theatre, which is generally occupied by some amusing exhibition. An extensive Hotel and Coffee Room are also attached to the concern. The purchase and building cost 16,000 and the whole was accomplished by Mr Home.”