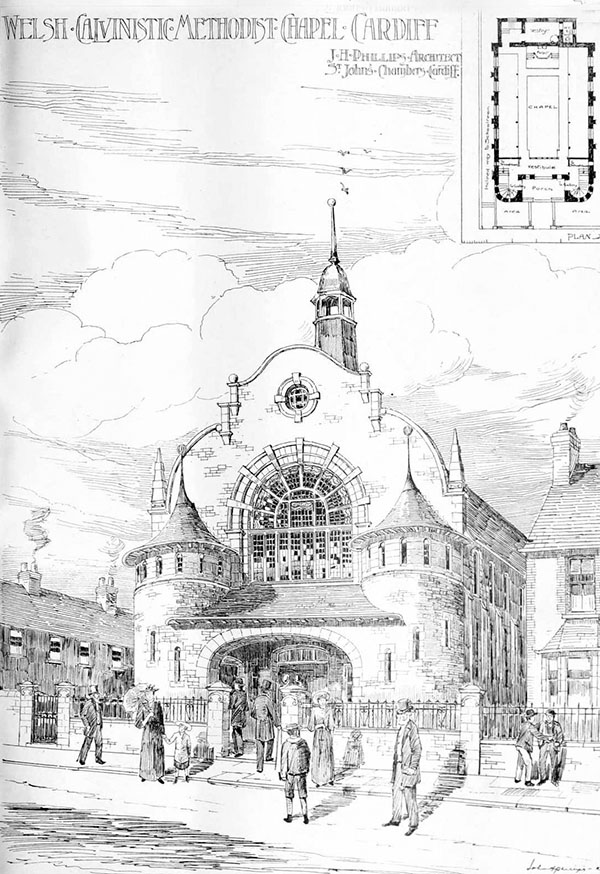 Built in an Lombardic-meets-Arts and Crafts inspired style with two storeys and a basement, a gable entry plan and flanking towers. In 1985 this building was converted for use as Shah Jalal Islamic Culture Centre. The chapel is now Grade 2 Listed for its striking and original chapel design retaining considerable historic character.

“This chapel is now being erected in Crwys-road, Cardiff. The materials used in the building are Pennant stone for the walls generally and Doulting stone for dressed work. Internally, the seats, etc, are of pitch-pine. Advantage has been taken of the level of the site being below the street, and a schoolroom, with classrooms, kitchen, and minister’s vestry, are thus provided. The chapel floor, together with a gallery, will accommodate about 600 worshippers. With regard to the design, the architect has not attempted any distinct style, but has endeavoured only to devise a building striking and picturesque in appearance, and yet indicative of its purpose. The builder is Mr. Harry Gibbon, of Cardiff. The amount of contract is £2,660, and the architect is Mr. John H. Phillips, St. John 8 Chambers, Cardiff.