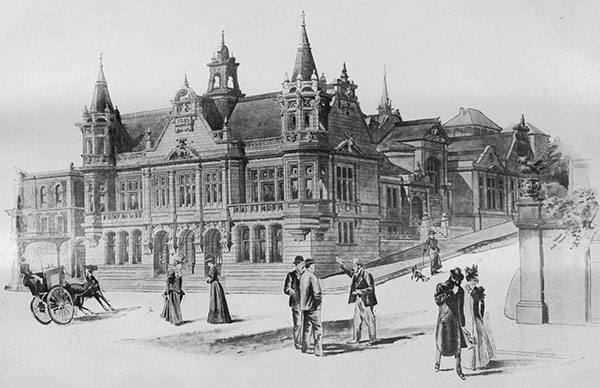 The erection of this library was made possible by a donation from the Estate of William Savage and a subsidy from the Colonial Government. Cheers’ design was selected after an architectural competition in 1897, and opened in 1903. The architect never visited South Africa.

“The subject of our illustration, now being erected by the contractors, Messrs. Dollery and Strang, at a cost of £21,000, was the result of an open competition responded to by some forty architects from all parts. The site had considerable difficulties, light being obtainable on the front and one return side only, the latter having, moreover, a rise of 22ft. from front to back. The lower or ground floor is devoted to a large chamber of commerce, with secretary’s room attached, the remainder being laid out in offices from which a rental of over £1,000 per annum is anticipated, owing to the important position of the building facing the Town-hall and Market-square. (In the first floor, a plan of which is given, the library proper is placed, with entrances from the two fronts, despite the levels. The feature is the memorial hall or reference library, and in this and the surrounding rooms, which are intended for sectional subjects, readers are to be allowed to help themselves to books : galleries, therefore, surround the rooms, lined with bookshelves on the wall sides, with convenient staircases and lift access. In addition, extensive storage is provided on an upper floor to the rear, as well as special staff entrance and book-mending room, etc, on the ground floor. The newsroom in the front has an elliptical curved ceiling, panelled, and will have the walls arranged in art-gallery fashion, the present library in town- hall having many valuable paintings in its possession. The memorial-hall is in the form of a Greek cross, having a dome to be filled with stained glass in the centre, and arched bays or wings opening out each side, in one of which will be placed a large painted window in memory of the late Mr. John Savage, whose children are contributing handsomely to the expenses of erection. The front and part return to St. Mary’s- terrace will be laced with ashlar from the Coega Quarries, S.A., the remainder being brick with cement fronts, the usual method of facing buildings in the locality. Green Westmoreland slates on boarding form the roof covering, and the joinery, dadoes, doors, windows, ic, are principally of teak, polished. Marble mosaic floors and marble columns, with stained glass, are the chief decorative features inside, most of which items are exported from this country, together with the steel joists for the fireproof flooring, electric-light fittings, and numerous other details the colony cannot yet command. The architect is Mr. Henry A. Cheers, of Twickenham.” Published in The Building News, October 27 1899.