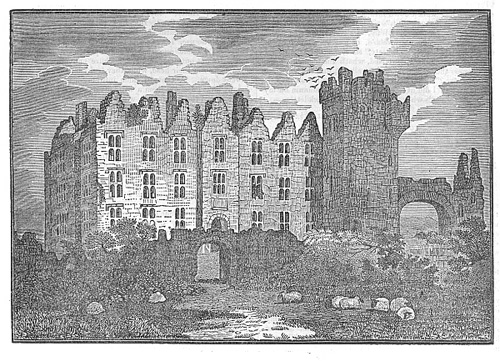 “This highly picturesque ruin is situated on the Nore, about four miles from Kilkenny, and derives its name, Inchmore, or the Great Island, from being nearly insulated by that beautiful river. It consists of a strong square keep, of considerable antiquity, united to a splendid mansion in the architectural style of the reign of Elizabeth and the First James—the period when such convenient domestic residences were first erected in Ireland. This was erected by Robert Grace, the Baron of Courtstown, and Member of Parliament for the County, who died in the year 1639, or 1640, and was interred in the Cathedral of Kilkenny. During his lifetime it was inhabited by his eldest son, Oliver Grace, who died before him, in the year 1637. The Barons of Courtstown, in selecting and improving Inchmore for a peaceable habitation, were evidently influenced by the beauty of its situation; and when surrounded by its ancient woods, and possessing all the varieties of landscape afforded by a beautiful river and an infinite variety of ground, it must have been a truly delightful residence.” The Dublin Penny Journal, Volume 1, Number 25, December 15, 1832