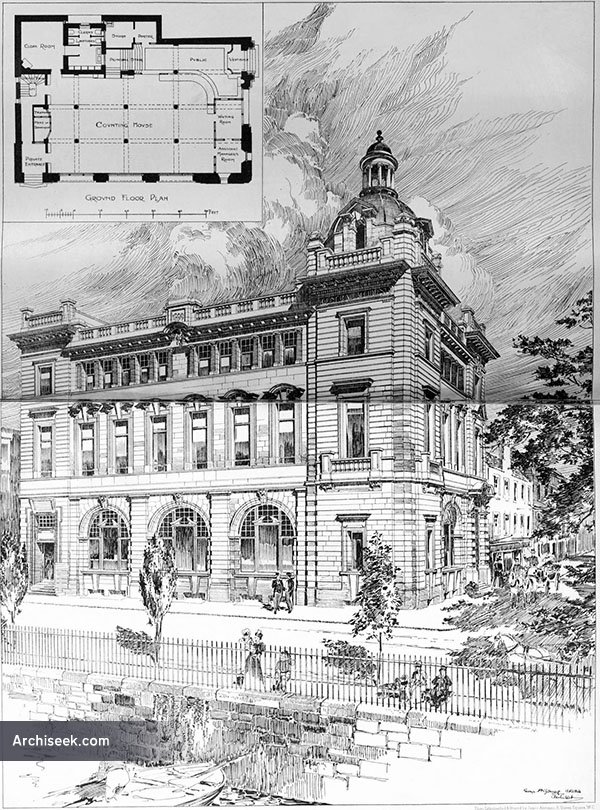 the General Accident and Employers’ Liability Assurance Association Ltd. was founded in Perth, Scotland in 1885. It became the General Accident Assurance Corporation Ltd. in 1891, and later through a series of mergers part of Aviva. The site previously was the location of Perth’s post office. This building designed by Young acted as the headquarters of the insurance group for over 70 years.

“This building is at present in course of erection on the site of the old post-office at the corner of High-street and Tay-street. The principal elevations are being built of yellow freestone from Woodbum Quarry, Cumberland, with polished Aberdeen Corrinnie granite doorways, and red stone columns in the colonnade of the second floor. Internally the walls of the principal office will be lined with marble and finished in wainscot. The staircase will also be of marble and wainscot, while the general manager’s room and the board- rooms will be panelled in fumigated mahogany. There is a basement floor extending under the whole area of the building, in which are situated the strong-rooms, store-rooms, boiler-rooms, and dynamo and storage battery for electric lighting. The level of this floor is under the flood-level of the River Tay, and it has therefore been specially constructed to be watertight, to withstand the very heavy floods which are so frequent in this river. The principal department on the ground floor will have desk accommodation for about SO clerks, with public space and counter ; and the department on the second floor accommodation for about 40 clerks. The architect is Mr. George P.K. Young, A.K.I.B.A , of Perth. The drawing which we give was exhibited at the Royal Scottish Academy this year at Edinburgh.”