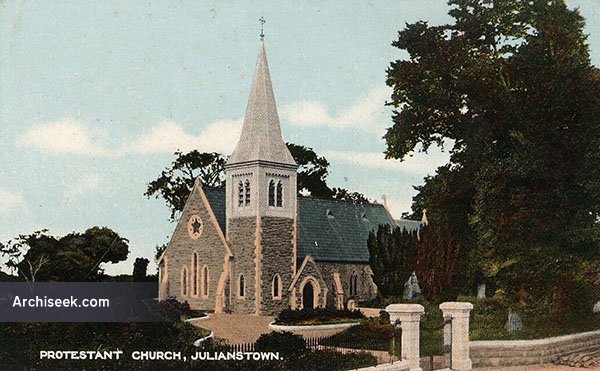 Parts of the nave of the current church was constructed in 1770 on the site of an earlier church. The church has been restored, rebuilt and enlarged over the centuries, but is largely a creation of the 1860s. A chancel and vestry were added by Welland & Gillespie in 1863, but their proposed tower and spire were not executed. The present steeple and chancel were constructed through the generosity of the Pepper family of Ballygarth Castle, in 1907 to designs of J.F. Fuller.

They also provided a rather elaborate altar with the figures of the four evangelists on the front. The church contains seven attractive stained glass windows. One of these depicts Lt. Col. Mc Donnell of Kilsharvan House. It was designed by Michael Healy. Four of the remaining windows commemorate seven officers of the Royal Meath regiment who were killed in World War 1. Another window depicts Christ and Mary Magdalen and is dated 1899.