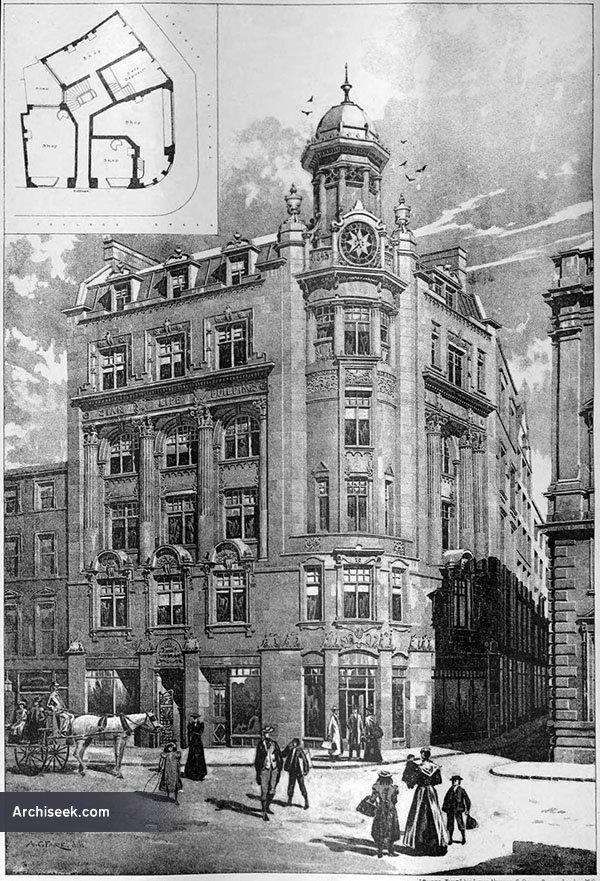 Constructed between 1899 and 1901 by English architect Arthur Blomfield Jackson, and his only work in Ireland. As it had done a few times around this time to other English architects, The Irish Builder was disparaging of the work – describing it as a building that ‘somehow does not appear to most architects to have been designed by an architect at all’. The building as finished varied in several aspects from the perspective drawing.

“The Star Life Assurance Society of London are now building branch offices in various parts of the United Kingdom. They have acquired an important site at Dublin facing College Green, with a return frontage to Trinity-street, and building operations will shortly be begun. The perspective sketch shows the building as it will be when completed ; but, owing to existing subleases, it will probably be some years before the corner itself can be dealt with. Meanwhile, the main portion fronting College-green will be proceeded with. The premises consist of shops on the ground floor facing College-green, with shops or offices in Trinity-street, the upper portion being arranged as suites of offices, all of which are particularly well lighted. In the basement will be a safe-deposit, with an entrance and general office in Trinity-street. A lift will be provided to all floors. The whole of the external elevation is in stone, the roof being of load and slates. The work will be executed from the designs and under the superintendence of Mr. Arthur Blomfield Jackson, Mecklenburgh-square, architect.” Published in The Building News, September 15 1899.