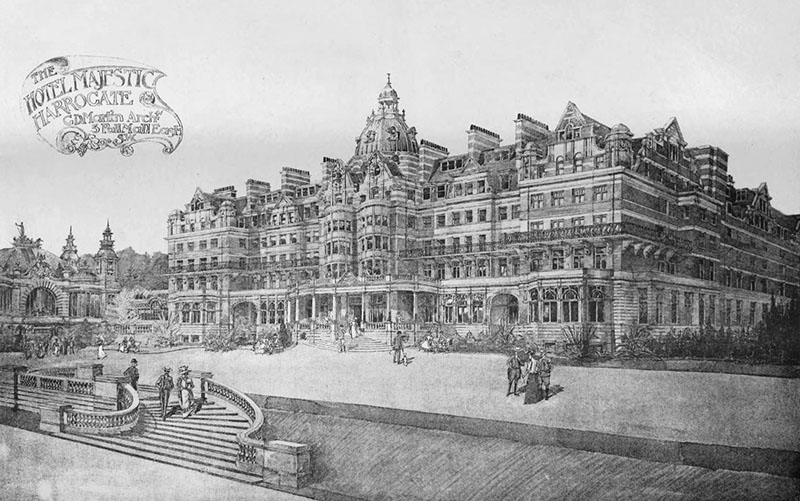 A Victorian landmark, the 4 star Majestic Hotel is situated at the heart of the spa town of Harrogate. With 170 rooms, it is one of the grand Victorian hotels still in business today. Despite being of “fireproof material”, there was a serious fire on the fifth floor in 2010. Listed.

“This building is now being erected on a site in the centre of the town on the Ripon-road, ad- joining and overlooking the grounds of the Spa Concert Room. The extent of the site is upwards of nine acres. There is an appreciable fall towards the south, and the main building, covering .an area of over 30,000sq.ft., is set out on the rising ground nearly due north and south in the centre of the site, with the south front overlooking the Spa Gardens. A special feature of the plan is a large central lounge and entrance-hall over 100ft. in length, with doors to a wide, covered loggia in the centre of the south front, intended also for use as a lounge and to form main entrance from the terrace for the visitors in hotel. It is intended to keep this lounge and entrance separate and distinct from the bustle of arriving and departing guests, carriage traffic, &c., which will be served by an entrance vestibule and hall on the north side, with manager’s and inquire’ offices, cloak-rooms, passenger and luggage lifts, &c. A carriage drive from the Ripon-road will lead to this entrance on the north side. The large central lounge will be bridged over at a height of 10ft. by the main staircase, access being given at this height to gallery lounges on either side, thus forming an upper tier ; the whole designed to be carried out in polished hardwood, the columns on ground floor being cased with panelling, and continued on gallery floor, with a free treatment of pilasters and arcading. The principal public rooms, of ample size and proportion for the accommodation of about 400 guests, are set out in a regular plan, east and west of the central lounge, i la the west side are the reception-room, reading and dressing-rooms, smoking and billiard-rooms : and on the east side the whole of the ground-floor area is given for a large salle-a-manger and ballroom, with annexe arranged to communicate, so that the whole can be used together and form a splendid range of rooms for public functions, balls, receptions.

As the hotel is in the centre of a well-known health resort, and close to the medicinal springs, these self-contained suites have been made an important feature, and should bo highly appreciated by delicate and invalid visitors. The construction throughout is of fireproof material, and provisions satisfactory to the municipal authorities have been made for emergency staircases from each of the upper floors. The elevations are designed for a free treatment of Early Renaissance, carried out in red Accrington bricks and York- shire stone dressing, the mullions, window-jambs. Arc, to bay windows being of Pately Bridge stone. The central dome and cupola will be dressed with copper, and the roofs throughout will be of green Westmoreland slates. The covered loggia at entrance is carried on columns of polished Aberdeen granite. Plans are being prepared for a largo range of stabling and loose-boxes for 50 horses, which will bo built in a picturesque hollow on the east side, somewhat secluded from view of the hotel windows, while a largo winter garden is planned leading from the hotel on the west side, with an entrance from the Ripon-road. The architect for the whole operation, including hotel, stabling, winter garden, engine-room, &c., is Mr. G.D. Martin, Pall Mall East, S.W., and the whole work is being carried out by Mr. Thomas Holloway, of London, for the Frederick Hotels, Ltd.” Published in The Building News, August 11, 1899.